After accusing Jackky Bhagnani, others of raping her, model Apernah gets death threats

Model Apernah in May had filed an FIR against actor Jackky Bhagnani, photographer Julian Colston and seven others for raping and molesting her. In her FIR filed at the Bandra Police Station, Apernah named nine people from the Bollywood industry including Krishan Kumar from T-series, Nikhil Kamat, Gurjot Singh, Sheel Gupta, Vishnu Induri, Ajit Thakur and Anirban Blah of Kwan Entertainment. The 28-year-old model had filed the FIR on May 26. The model has now claimed that she is receiving death threats from fake accounts. In a long note on Instagram Apernah has shared her ordeal and said that ‘if anything unnatural happens to me’ the nine men should be held responsible. 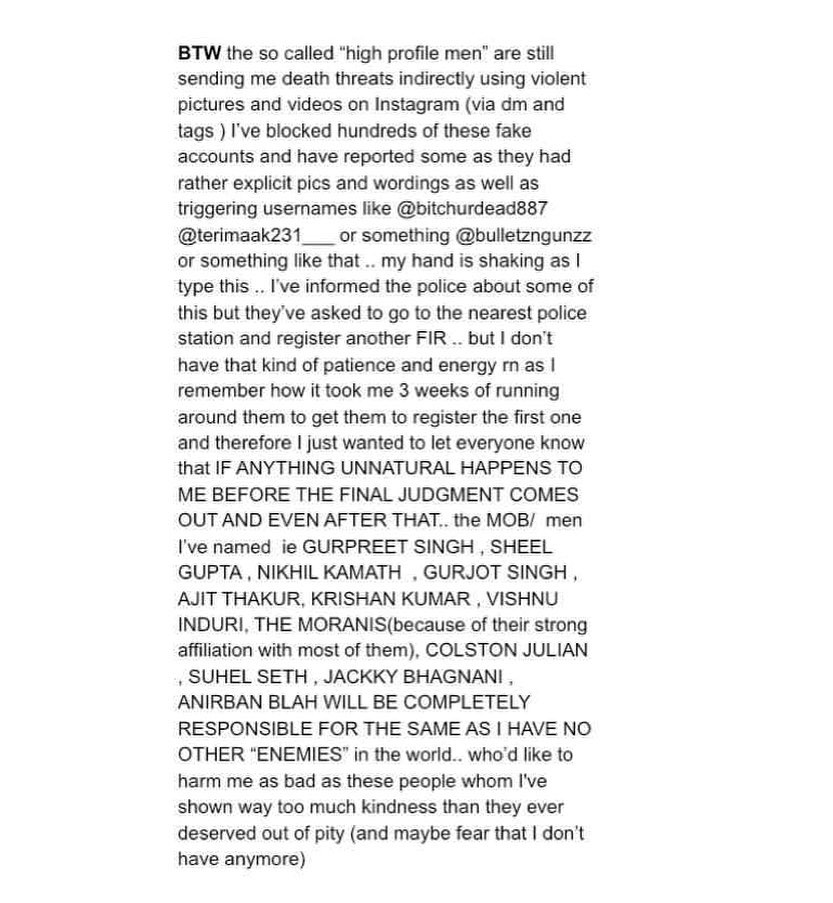 In her note, Apernah wrote on Instagram, “BTW the so-called “high profile men” are still sending me death threats indirectly using violent pictures and videos on Instagram (via dm and tags). I’ve blocked hundreds of these fake accounts and have reported some as they had rather explicit pics and wordings as well as triggering usernames like @bitchurdead887 @terimaak231 or something @bulletzngunzz or something like that.. my hand is shaking as type this.. I’ve informed the police about some of this but they’ve asked to go to the nearest police station and register another FIR.. but I don’t have that kind of patience and energy m as remember how it took me 3 weeks of running around them to get them to register the first one.” 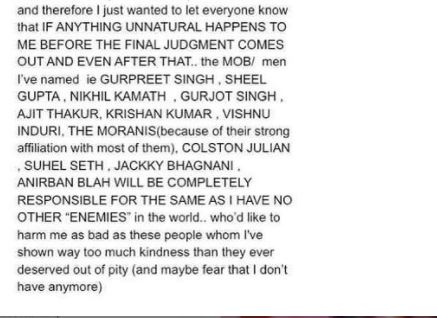 She further wrote, “Therefore I just wanted to let everyone know that IF ANYTHING UNNATURAL HAPPENS TOO ME BEFORE THE FINAL JUDGMENT COMES OUT AND EVEN AFTER THAT.. the MOB/ men I’ve named, i.e. GURPREET SINGH, SHEEL GUPTA, NIKHIL KAMATH, GURJOT SINGH, AJIT THAKUR, KRISHAN KUMAR, VISHNU INDURI, THE MORANIS (because of their strong affiliation with most of them), COLSTON JULIAN, SUHEL SETH, JACKKY BHAGNANI, ANIRBAN BLAH WILL BE COMPLETELY RESPONSIBLE FOR THE SAME AS I HAVE NO OTHER “ENEMIES” in the world.. who’d like to harm me as bad as these people whom I’ve shown way too much kindness than they ever deserved out of pity (and maybe fear that I don’t have anymore).” 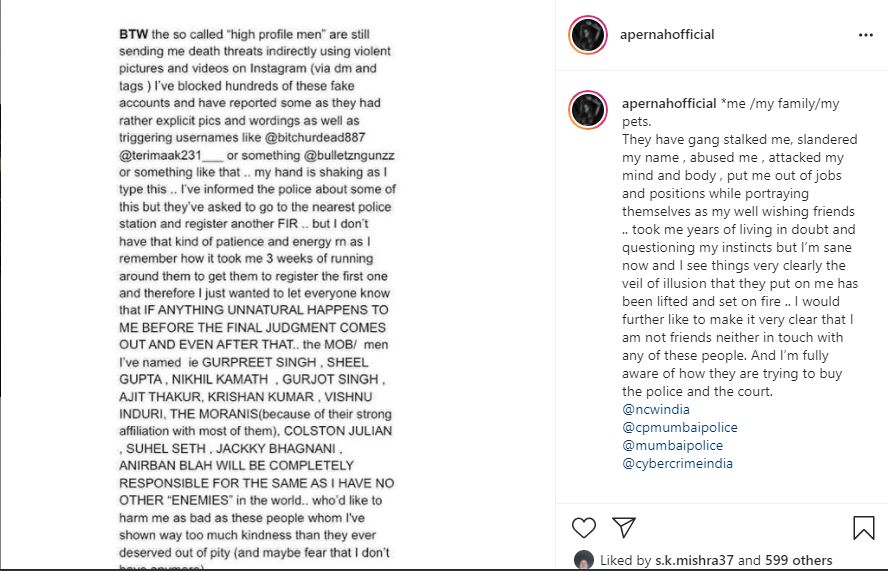 While sharing the note, she wrote in her caption, “*me /my family/my pets. They have gang stalked me, slandered my name, abused me, attacked my mind and body, put me out of jobs and positions while portraying themselves as my well-wishing friends.. took me years of living in doubt and questioning my instincts but I’m sane now, and I see things very clearly the veil of illusion that they put on me has been lifted and set on fire.. would further like to make it very clear that I am not friends neither in touch with any of these people. And I’m fully aware of how they are trying to buy the police and the court.” The model has previously also accused renowned industry photographers Julian Colston and Suhel Seth of sexual harassment.