After More Than 20 Years, Soni Razdan Reunites With Helen And Reveals ‘Something’s Cooking’ Check It Out!!!

Soni Razdan went to social media on Wednesday to post a selfie with veteran performer Helen and give a clue about their impending collaboration. The actress from Shootout At Wadala tweeted the photo with a beautiful caption that read, “After more than 20 years, I believe we finally met up again. We have some really meaningful moments in common! And we’re about to start producing some more:) #actorslife #helen #pastlives #memories” The two actresses are seen in the shot posing for the camera with their grins on their faces. Look at the post below: 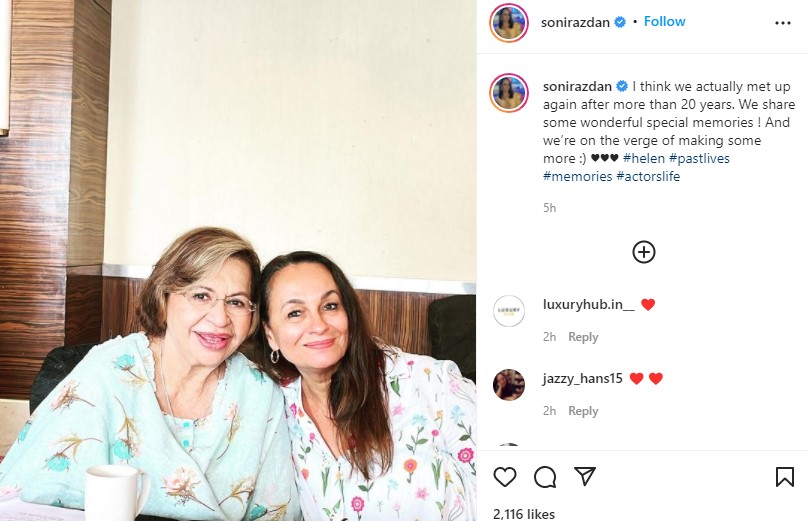 Helen chose a mint green flowery ethnic dress, while Soni wore a white patterned outfit. They were seen at a restaurant. Many fans and followers expressed their delight in the comments section shortly after the actress published the shot. “Nice soni,” Neetu Kapoor wrote on the picture, followed by a heart emoji. “I’m very jealous,” casting director Shanoo Sharma said. Soni also used Instagram to post tales while having her cosmetics done for an upcoming project.

In the meanwhile, Soni Razdan was most recently seen in the online series Call My Agent: Bollywood, with Aahana Kumra, Ayush Mehra, Rajat Kapoor, Radhika Seth, and others. She has appeared in films such as Raazi, Sardar Ka Grandson, The Verdict, and others. In her next, she will act along with Ishaan Khatter, Mrunal Thakur, and Priyanshu Painyuli in Raja Menon’s Pippa. Helen was last seen opposite Kareena Kapoor Khan, Arjun Rampal, and Randeep Hooda in the 2012 film Heroine.