Amitabh Bachchan Is Dissatisfied With Not Having Enough Followers

Actor Amitabh Bachchan shared his photo from his next movie “Uunchai” set on Thursday. The Instagram scene showed him carrying a backpack on his back and standing on a bridge fighting heavy rain. Amitabh Bachchan talked about the scene and attributed the intense sequence to actor Vicky Kaushal’s father, action director Sham Kaushal. He also raised the issue of not having enough followers on his social media account.

He added, “Action by Vicky’s father, Shyam… and none of the beautiful ladies who get millions of follow numbers .. (weary face emojis)… to help me get some follow too… argh (shocked face with exploding head emoji).” Amitabh has a total of 46.7 million followers on Twitter and 29.2 million followers on Instagram.

His Uunchai co-star actor Parineeti Chopra said in the comments section: “Nepal’s clothing in Bombay! It’s been mind-blowing watching you every day and shoot this one sir.” Rohit Roy commented, “Amit ji I will never tire saying this that for the last 50 years, you have inspired each and everyone who has come into the performing arts, in any discipline, in every medium! I love you! Sorry, we love you!” 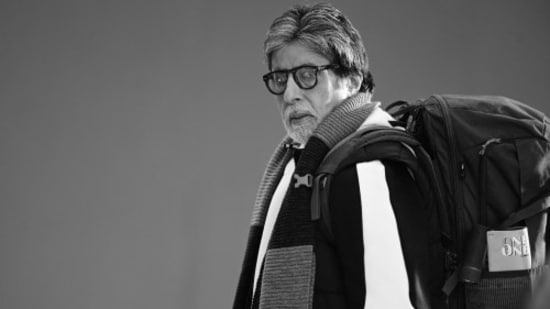 In another post, Amitabh went back in time and shared the collage. In the photo, as seen in the song Saara Zamana (Yaarana), he wears a black bodysuit with a small light and poses in a group.

He captioned it, “Performing Yaarana song Live on Stage with the Rockets of New York… Madison Square Garden, NYC and Wembley Stadium, London .. 80,000 audiences.. what a time .. those were the days my friend!”

Amitabh will appear at Sooraj Barjatyas Uunchai alongside Parineeti, Anupam kher and Boman Irani. He can also be seen in goodbye with Neena Gupta. Brahmastra’s Ranbir Kapoor and Alia Bhatt. Ajay Devgn on Runway 34. He is also has intern remake in the pipeline.