Arjun Kapoor Talks About The Outbreak On The Set, “I Had Every Right To Do So”

Actor Arjun Kapoor said it happened on his set on Monday, but didn’t give details about what happened.

Taking to Instagram Stories, Arjun Kapoor wrote, “Yeah I had an outburst on set, but I had every and I mean EVERY right to do so. Irritation bahot hai, abhi mood nahi hai samjhane ka… kal pata chal jayega (There’s a lot of irritation but I’m not in a mood to explain. You will get to know tomorrow)!!!” 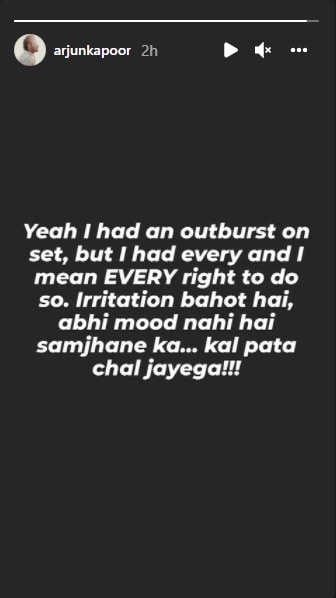 Earlier on Sunday in a video, Arjun had said, “Damn you guys yaar. Pehle kyun nahi kiya yeh sab? Humari life aasaan hojati pata hai aapko (Why didn’t you guys do this before? Our lives would have been much easier, do you know that)? You guys owe me an apology.” Arjun’s post on Monday is seemingly for an ad. Arjun Kapoor’s post was a few days after celebrating the Diwali festival with his girlfriend Malaika Arora at a party hosted by his uncle Anil Kapoor.  Arjun recently shared a post on Instagram with a photo of him and Malaika smiling at them.

Sharing the picture, Arjun wrote, “When she laughs at my nonsense, She makes me happy…@malaikaaroraofficial. Thank you @ak_paps for this picture.” Malaika reacted to the post by dropping a red heart emoji in the comments section.

Arjun and Malaika have a long relationship. But on Arjun’s 34th birthday in 2019, they officialized their relationship on Instagram.

Arjun Kapoor has appeared in several films this year with Divakar Banerjee’s Sandeep Aur Pinky Faraar and Kaashvi Nails Sardar Ka Grandson. He was recently seen at the Boot Police with Saif Ali Khan, Yami Gautam, and Jacqueline Fernandez. Produced by Ramesh Taurani and Akshay Puri, the film was released on September 10th at Disney Hotstar.

Last month in an interview, he had said, “Sandeep Aur Pinky Faraar has been a game-changer for my career. It presented me in a radical way that audiences had never seen before and I’m deeply thankful that they loved my performance in the film. The success of SAPF has opened several doors for me with filmmakers wanting to cast me in their eclectic visions. The Ladykiller and Kuttey are prime examples of how the industry is looking at me today and as an actor, I couldn’t be more fortunate!”

Arjun had also said, “I’m excited about my line-up as it’s a great mix of masala commercial films like Ek Villain Returns and also genre-bending entertainers like Kuttey and The Ladykiller. I have a few more announcements lined up and they are all equally diverse from a script point of view.”