Contestant Who Forcibly Kissed Neha, Has Tatto Of Her; “I wanted to call the police” Said Co-Judge Vishal

Neha Kakkar is one of the most talented singers in the music industry. Popular singer Neha Kakkar stepped up in the music industry by participating in the singing reality show Indian Idol 2 in the year 2006 and in 2008, she appeared as a contestant in Jo Jeeta Wohi Super Star- Season 1. Neha is growing every day with her tracks and is best-known for singing all the latest rocking tracks including Hook-ups song, Saki Saki Re, Dilbar and Aankh Mare from the movie Simmba and many others. Neha Kakkar appeared as a judge on the singing reality show Sa Re Ga Ma Pa L’il Champs and after that, she was seen in the judges panel of singing reality show Indian Idol, now for the second time she is featured as one of the judges in Indian Idol 11.

Now, a few days back, we bought you a video where one can see a few contestants showcasing their singing talent. At the end of the video, one contestant was seen asking the singer if she recognizes him, Neha was seen recalling if she met him before. The contestant was all dressed up in a Rajasthani attire, and he brings a lot of gifts and a soft toy for Neha. Further, in the video, as the singer went on stage for thanking him for all the gifts he brings along. Neha was seen slightly giving the thankyou hug but before she could move away after a hug the contestant ended up holding her tightly and kissed her on the cheek. Neha was seen disappointed with the contestant’s misbehaviour and the whole situation left the other judges in real shock. 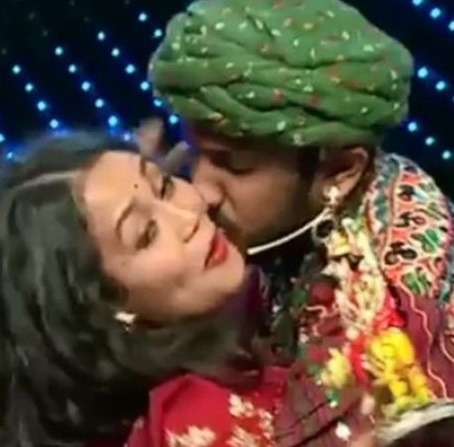 And now, here is what one of the other judges, Vishal said for the whole scenario when one particular fan took to his social media to question co-judge Vishal Dadlani on the matter. He tweeted, “@VishalDadlani sir uss launde ko chamet maarni chahiye thi. How dare he do such a thing. I hope he was not let off easily.” To this Vishal replied, “I suggested that the Police be called, but Neha decided to let the guy off the hook. He definitely needs psychiatric help, and we will try to help him get that, if we can. #IndianIdol11.” 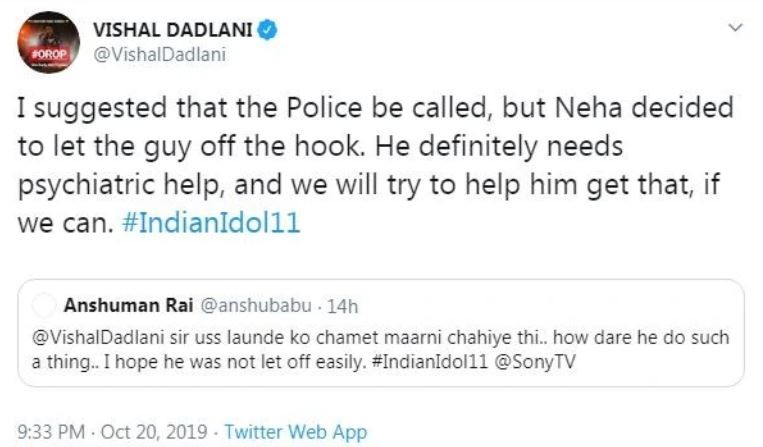 The host of the show, Indian Idol 11, Aditya Narayan also gave his thoughts and to Times Of India in an interview. Aditya revealed that their first reaction was to get the man off Neha Kakkar and safeguarded her. “I understand what it is to have fans who are obsessed. I know this man has a tattoo of Neha on his hands. So in some way, this man must have immense love for her. You kind of feel for them as well. But you need to make them aware of where to draw the line,” said Aditya.