Deepika Padukone Is Always Prepared For Her Close-Up At Cannes 2022; Check Out Her Posts!

Deepika Padukone has released three photos from her recent attendance at the Cannes Film Festival on Instagram. Deepika wore a sequin-short dress from Louis Vuitton’s shelves to the jury supper at the Hotel Martinez on the first day. Rebecca Hall, Vincent Lindon, Jasmine Trinca, Asghar Farhadi, Ladj Ly, Jeff Nichols, and Joachim Trier were among the jury members present. The actress wore a dazzling multi-colored dress and brown high-heeled heels to complete her ensemble. She’s tweeted many close-up photos with the hashtag “#Cannes2022.”

Before walking the red carpet, she released a video from her second day at the Cannes Film Festival. The actress donned green high-waist trousers with a Mysore silk shirt. Lucknow Rose, a deconstructed Maharani necklace, and a headscarf, all designed by star designer Sabyasachi, completed her ensemble. 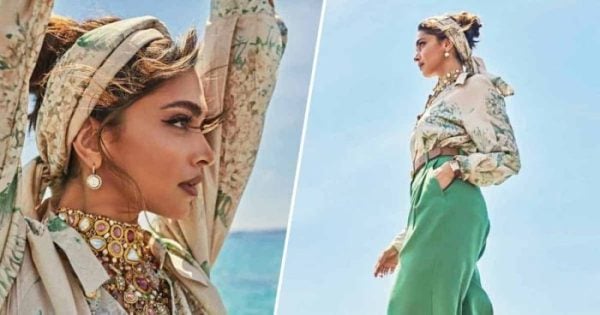 Deepika Padukone wore a dazzling golden black saree with an off-shoulder sequin top on the red carpet. The actress wore dramatic eye makeup to keep her look on point. Sabyasachi fashioned her hair bun and accessorized it with a statement headband, all of which were inspired by traditional Indian matha patti. The actress has shared a video on her Instagram account that includes some previously unseen footage from the Cannes Day 2 album.

Deepika Padukone has been killing it on the French Riviera since she arrived. She was photographed at the airport wearing a Louis Vuitton denim-on-denim combo. The actress donned a white tee with blue pants and a denim jacket over top. She finished her ensemble with a brown Louis Vuitton bag. She later posted a video on her Instagram account notifying her followers that she had arrived.

Deepika Padukone’s next look is a Sabyasachi saree in a glossy black and golden hue.

Deepika Padukone wore a black pantsuit with a dramatic silver neckpiece to the India Pavilion event on the third day. Deepika Padukone is a member of the jury for the 75th Cannes Film Festival, which began on Tuesday with an opening ceremony. On May 28, 2022, the event will come to a close.