Dia Mirza tied the knot with Vaibhav Rekhi, who is a businessman, on February 15, amidst the presence of close family and friends. The wedding took place in a beautiful ceremony held at Bell Air Apartments in Mumbai’s Bandra West. It was a pretty intimate ceremony with only the closest of family and friends in attendance. The couple made things official as they signed the documents, followed by the varmala ceremony.

The couple looked stunning in their wedding attires, Dia chose to wear a red Banarasi saree, with details in golden all over it, which well complemented the groom’s Sherwani and turban. Pretty as she looked, it’s her charming smile that captivates the hearts.

Actor Aditi Rao Hyadri and director Kunal Deshmukh were also in the presence at the wedding.  Aditi took to Instagram and also shared a picture of herself taking part in the ‘Joota Chupai’ ritual at the couple’s wedding. 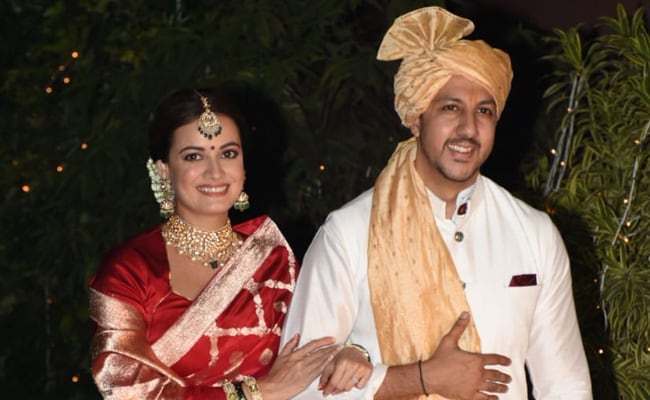 This is Dia and Vaibhav’s second time tying the knot, as both of them have previously been married to other people. Dia was earlier married to film producer Sahil Sangha before they parted ways in 2019. They had been together for 11 years. On the other hand, Rekhi’s first wife was yoga and lifestyle coach Sunaina Rekhi. The ex-couple shares a daughter together. Once during and interview with the Filmfare, Dia Mirza had spoken about what she had learnt so far with her relationships. Dia had said, “That you can never know what’s going to happen. You feel and experience something, and the next moment you’ll be wondering this wasn’t expected. Fact is when you fall in love, you aren’t privy to many things about your spouse. There’s always a surprise coming your way. It’s more about how you accept them.” When asked if she would go for love over lust, Dia had retorted, “They’re both important. You need to lust after your partner because love can only take you that far. Lust is important too.”

Here’s to wishing Dia and Viabhav a happily ever after!