Priyanka Chopra is the ultimate beauty. She never fails to impress her fans with her acting skills or rocking any award shows with her glamorous avatars. Just like that our  Desi Girl is keeping up with all the Indian traditions that don’t matter if she is in the US or Mumbai. PeeCee who got married to Nick Jonas in December 2018 celebrated her first Karwa Chauth in Los Angeles.

On 17 October 2019, Priyanka took to her  Instagram and gave her fans and followers a glimpse of what her first Karwa Chauth looked like and how she celebrated the festival with Indian traditions. Talking about her husband Nick Jonas’ Happiness Begins tour, Nick and Priyanka took some time to celebrate the festival at a Jonas Brothers concert. Priyanka was seen flaunted her bridal look as she shared a selfie with her friends including Anusha Dandekar. 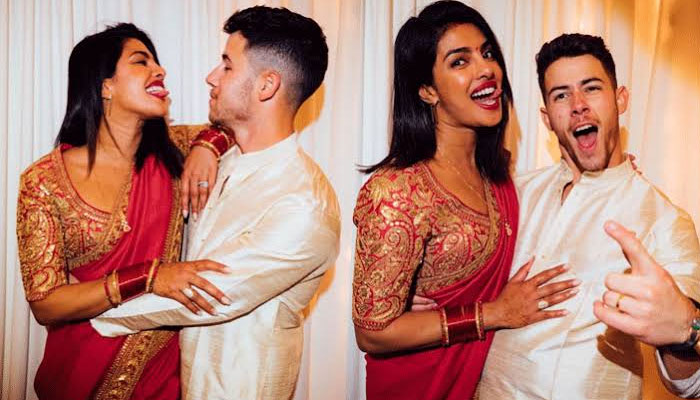 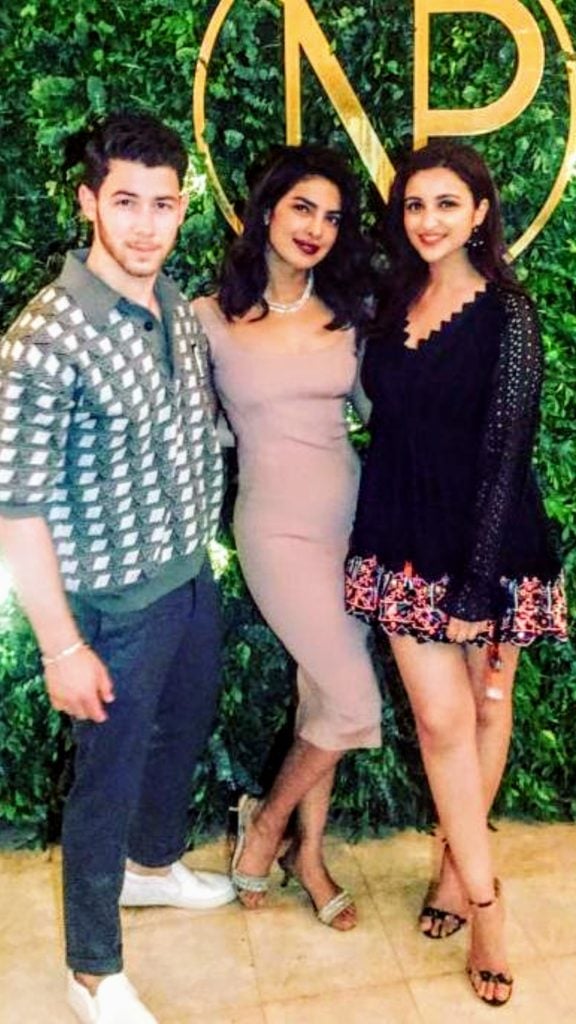 Meanwhile, Nick was also taken to his Instagram and shared a few adorable pics of him and Priyanka. But we have some really exciting news for actor Parineeti Chopra’s fans. While we all were busy looking at Priyanka’s first Karwa Chauth celebrations pictures, our eyes caught something in the comments section. Parineeti Chopra commented on the post she wrote, “All our lives she fasted and made us all fast for the perfect husband! Now, this is the first year she has him! She further added Now it’s my turn? @nickjonas @priyankachopra.” 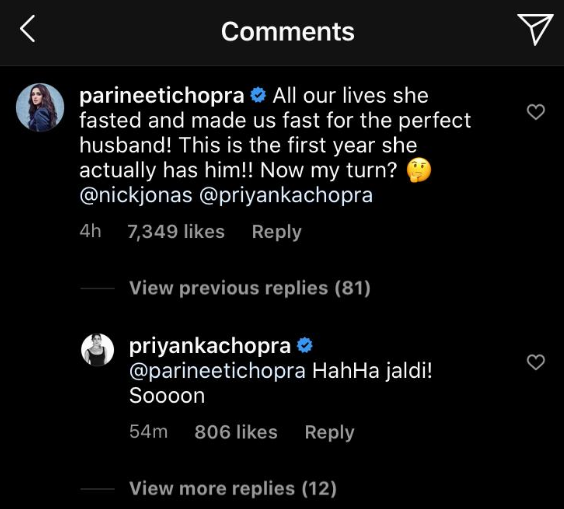 Aren’t she just seen dropping hints about her wedding that could happen anytime soon!? 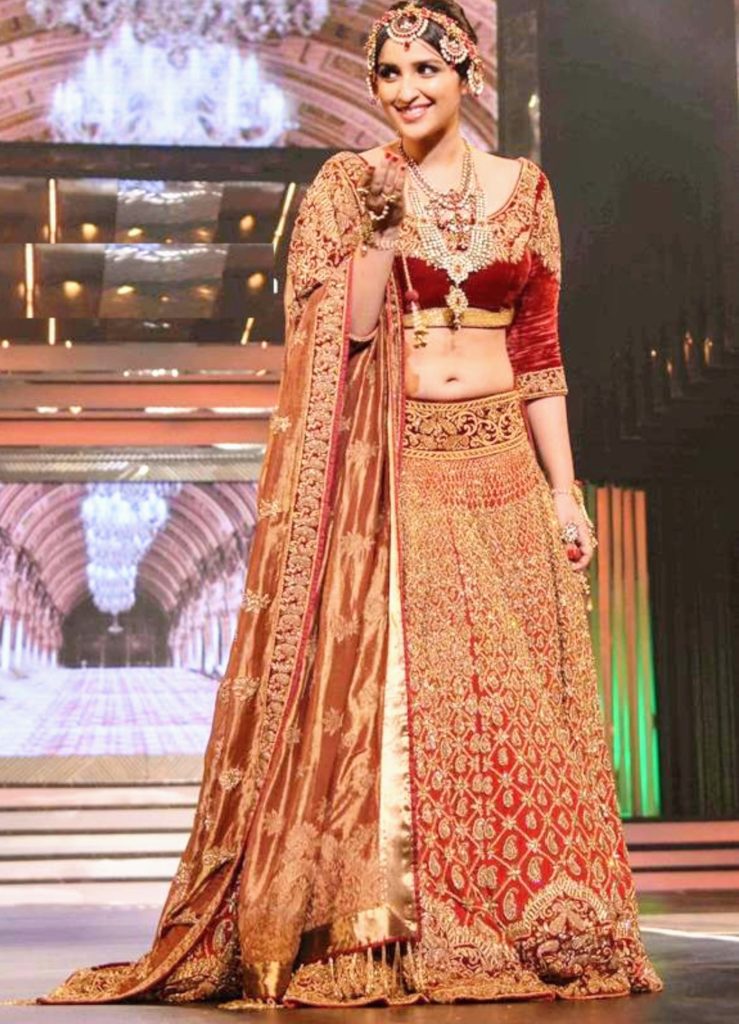 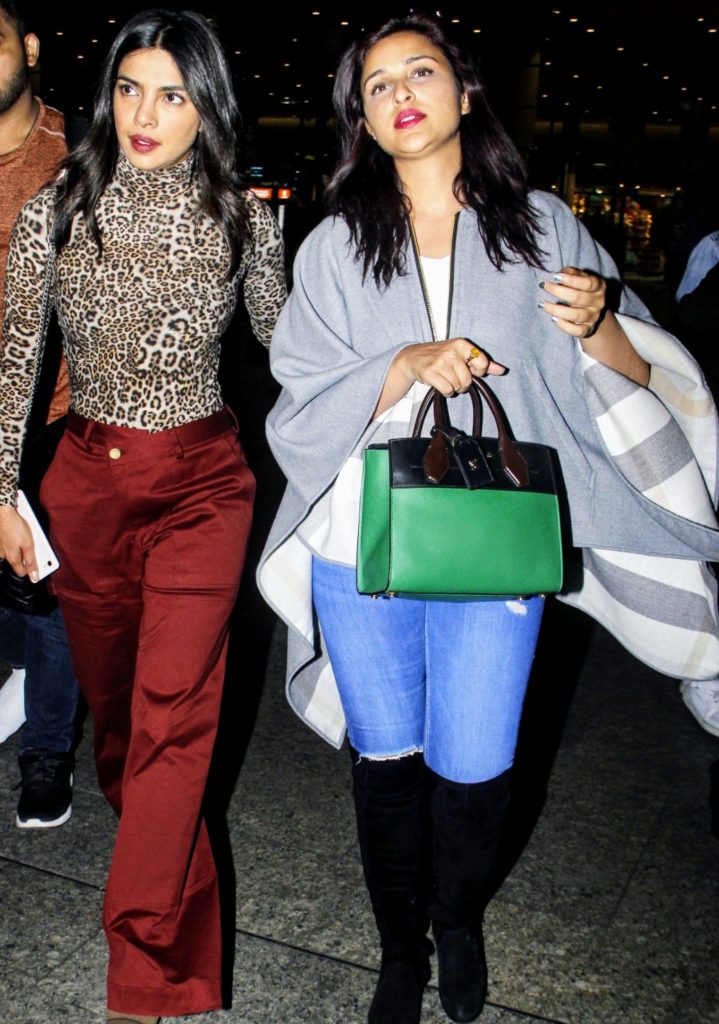 Meanwhile, The actresses had a big news revelation on Friday. The Chopra sister’s will voice the animated characters, Elsa and Anna, from Frozen 2, in its Hindi version. The film is a sequel to the hit animated  Disney film  2013, Frozen. Sharing the news, Priyanka took to her Instagram she wrote: “Mimi and Tisha are now Elsa and Anna!  #ChopraSisters are finally coming together for Disney’s Frozen 2. Can’t wait for you guys to see us… I mean HEAR us bring these amazing, strong characters to life in Hindi.#Frozen2 in theatres on 22nd November 2019. @parineetichopra @disneyfilmsindia #frozensisters.”

We can’t wait to hear the powerful voice of Chopra Sisters in the sequel of Frozen2!

Kareena Kapoor Opens Up About Breakup With Ex-Boyfriend Shahid Kapoor, And Falling in Love with Husband, Saif Ali Khan
Alia Bhatt Reveals How Beau, Ranbir Kapoor Has Helped Her In Facing The Failures Of Life
Have Hrithik Roshan and Ex- Wife, Sussanne Khan Moved-In-Together ? “Co-Parenting Amidst The Pandemic”
Mira Rajput Goes Mushy With Her Birthday Wishes For Husband Shahid Kapoor; Calls Him “The Love Of Her Life”