FNP Media, a content company and production house, by Ferns N Petals today organized a movie screening to announce the launch of a new short film: Chuha Billi. The screening was held in the graceful presence of actresses Adah Sharma & Anupriya Goenka. The movie is releasing on 12th Feb 2021 on the YouTube channel Films by FNP Media, it is produced by FNP Media and Crystal Minds. Chuha Billi is Co-produced by Parvathi and directed by Prasad Kadam.

The story revolves around two friends Adah Sharma (Katrina) & Anupriya Goenka (Seerat). Katrina and Seerat live together; one of them is a patient of mental illness and is undergoing medication and therapy. The other one is mature and sane, taking care of her friend. In this Seerat decides to move out with her boyfriend and is in a dilemma on how to divulge the news to Katrina. Meanwhile, Katrina finds out about the news while secretly checking Seerat’s social media. How will a mental illness patient react when she gets to know that the only person she trusts is leaving her? The movie has a gripping climax; viewers would skip a beat as the movie comes to an end.

Present at the occasion, Adah Sharma, Lead Actress comments, “This movies is a dark subject. I play a girl who is a bipolar. She is depressed and she isn’t coping it well. I would like to believe I’m actually the opposite of this character, and that’s what attracted me the most to play her. We did a lot of workshops for the film too”

“Through Chuha Billi we have tried to portray the emotional insecurity of mental patients. I am playing best friend of a girl who is bipolar. I am sure the audience will enjoy watching this.” said the very talented Actress, Anupriya Goenka. 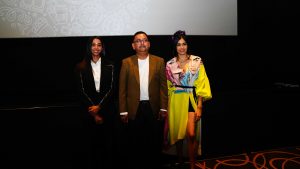 “FNP as a company has been a part of peoples’ lives from birth to marriage and even death, the journey of human emotion has been experienced from very close quarters, and it was but natural to translate that understanding on screen. Our country has vast talent, Ferns N Petals through FNP Media is determined to identify people who demonstrate amazing talent and help them foray that into a long term career.” said Mr. Vikaas Gutgutia, MD &  Founder, Ferns N Petals & FNP Media

The screening was attended by people from the industry, cinema critics and others. The FNP Media team tried to answer every question asked about the movie. Audiences also clicked photographs with the two young actresses.

“This year has perhaps started off with some great kick and it is only going to get better especially considering that we are all set and excited to welcome Chuha Billi! The film is a hard work of the entire team starting from spot boy to the director who deserves a huge round of applause, I on behalf of FNP Media would like to express my gratitude to everyone associated with the making of this beautiful movie,” said Mr. Ahmad Faraz, General Manager, FNP Media. 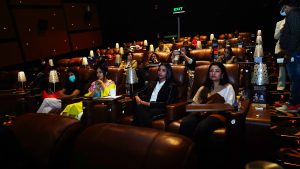 FNP Media with its movie: Chuha Billi is confident of receiving an overwhelming response from the audiences. It also has many upcoming plans to experiment with its offerings.

FNP Media is a content company and production house that works to produce quality content for digital platforms. Given the fact that FNP has been a part of peoples’ lives from birth to marriage and even death, the journey of human emotion has been experienced from very close quarters, and it was but natural to translate that understanding on screen.

FNP Media has two verticals, Live By FNP Media and Films By FNP Media The content in the form of short films, web series, storytelling etc. is hosted on YouTube channels of the respective verticals that showcases performing arts, films & shows etc.