Hina Khan is certainly one of the most talented actresses in Bollywood and the most well-maintained one as well. She has been making headlines by flaunts her glamorous side on global tours ad red carpets. However, the actress chose to dress casually in the Housewarming party that was hosted by her Kasauti Zindagi Kay 2 co-star Parth Samthaan.

Hina Khan, Shubhaavi Choksey, Sahil Anand, Uday Tikekar from KZK and his close buddies were invited by the actor. An excited Parth shared a lot of pictures on his social media. In some, Hina, who essayed the role of Komolika in the show was spotted wearing a casual T-shirt. The actress who loves to flaunt her glamorous side in all her pictures and simply loves to dress up kept it very casual. Whereas others looked stunning in their respective attires.

And now the actress herself took to her Instagram story to reveal details about her sartorial choice. Well, it seems that Parth himself had gifted the t-shirt to her while the party was on. Did she spill something on her clothes, we wonder because she calls Parth a ‘saviour’ for giving her the t-shirt.  Sharing a group picture she wrote, “Look at us…thank you @the_parthsamthaan for giving me your Tshirt to wear..you wer my saviour..” 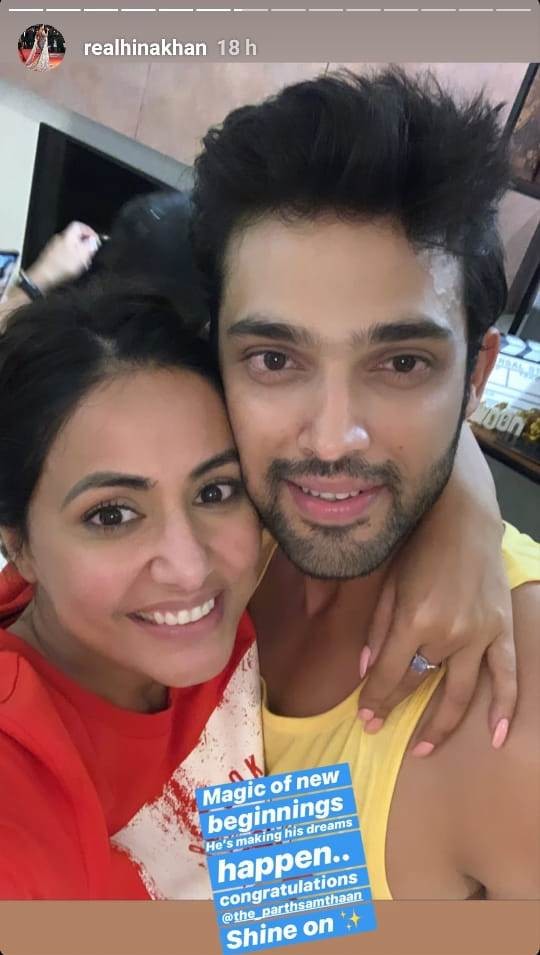 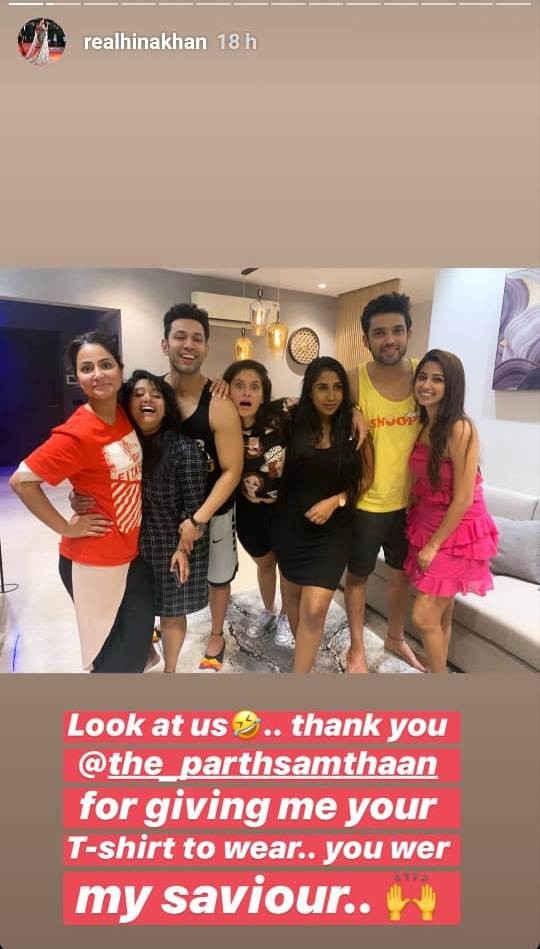 However, the only person which is missing at the party was  Erica Fernandes. A source close to the actress said, “Erica was shooting for her scenes with Karan Singh Grover on the set (Klick Nixon). But post her pack-up, she didn’t join the gang. Well, she wasn’t invited for the bash. In fact, the source also states that even on sets of the show, Parth and Erica have strictly kept a professional equation, nothing more than that.”

Ranbir Kapoor Revealed How He Detached Himself From His Mother Neetu Singh Post Breakup With Deepika Padukone
Kareena Kapoor And Karisma Set Sister Goals As They Are Vacationing In London With Family
“Life Goes On At Its Own Pace But Some Memories Can Never Be Forgotten Of Our Dearest Ones,” Says Ankita Lokhande
Ibrahim Ali Khan Opens Up On His Relationship With Dad Saif Ali Khan, “He Is Special To Me”