Shilpa Shetty is all set to fire up your screen with her upcoming film Hungana 2. Bollywood superstar Akshay Kumar on Thursday released the much-awaited trailer of the film and called it ‘a crazy laugh riot.’ Also featuring Paresh Rawal, Meezaan Jafri, and Pranita Subhash, the film will start streaming on Disney Plus Hotstar from July 23. 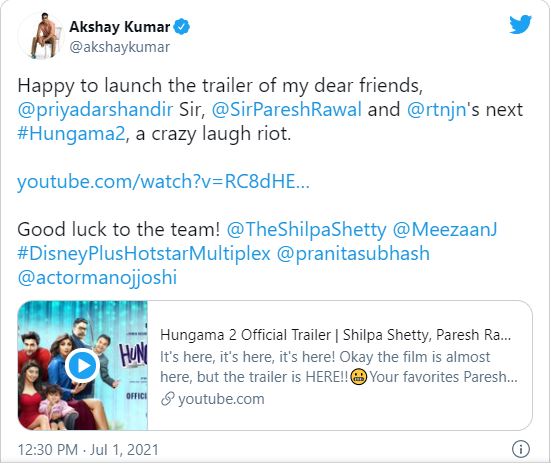 Akshay Kumar wrote, “Happy to launch the trailer of my dear friends, @priyadarshandir Sir, @SirPareshRawal and @rtnjn’s next #Hungama2, a crazy laugh riot.” He also wished his good luck to the team. On the other hand, Shilpa Shetty tweeted, “Khatam Hua aapka aur mera intezaar, Face with cold sweat 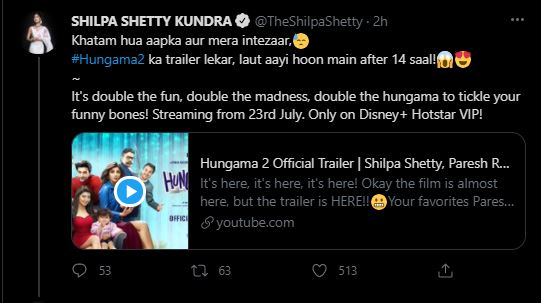 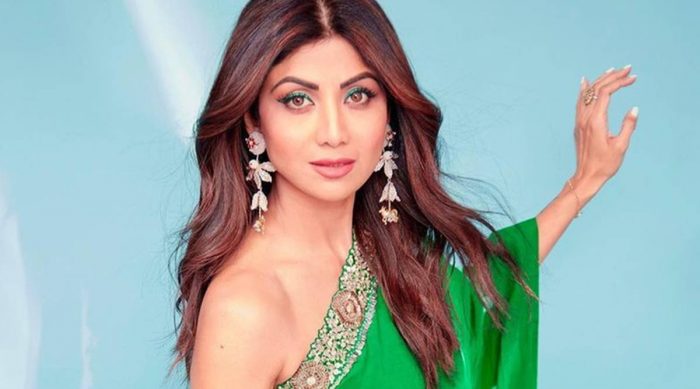 Shilpa, who took a long break from films, is happy to be working on set again. She told PTI, “The love I have received over the years is unbelievable. It makes me happy, humble, and grateful to know people have appreciated my performances and are wanting more. Also, I love being on set and acting in front of the camera. I am so excited to be back and doing what I am really passionate about.”

Earlier, the film was slated to hit theatres on August 14 this year. Producer Ratan Jain said Hungama 2 is headed for an OTT release this year to entertain the audiences amid trying times. “Hungama 2 is a lighthearted film meant to be enjoyed across all age groups, and we feel it will entertain the audiences and bring some cheer in these trying times. We will release the film on a digital platform this year and movie lovers can enjoy the laugh riot at the comfort of their homes,” Jain said in a statement.