Becoming a mother is one of the biggest happiness for a woman and you definitely feel the stars from the galaxy falling on your feet. But what happens when the world is not as elated with your pregnancy and questions it? Same is the situation being faced by Kalki Koechlin. She is pregnant with her boyfriend Guy Hershberg’s baby without tying any nuptial knot with him and this has raised many questions. 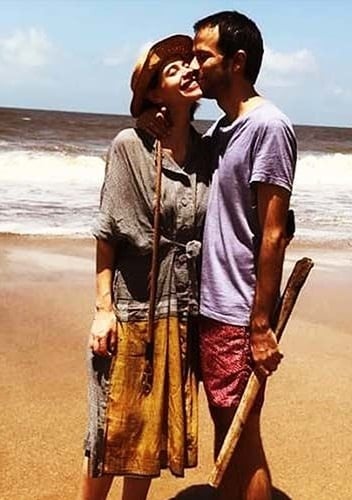 As earlier reported by HT Brunch, the actress has entered her fifth month of pregnancy and has even decided a name for her baby. Now, in a recent interview with Mumbai Mirror, Kalki opened up about Guy Hershberg, his reaction to the pregnancy, and much more. She said that she is with someone who makes her feel calm and stable. She also revealed that her pregnancy was so unplanned, she couldn’t believe it at first and called for another pregnancy test.  When asked if Guy Hershberg was around when they found out about her pregnancy, she said, “Oh yes, and he was jumping with joy.” She further added about Guy, “It’s a process of gradual trust. Ironically, the distance helped us communicate a lot more since we don’t have the luxury of seeing each other every day. He has spent his life teaching children piano so, he’s going to be the disciplinarian, the more experienced parent I feel.” Kalki also shared that she first broke the news to her family, her make-up artiste, a few close friends and her manager and they were all overjoyed and overwhelmed.

Relieved I can let that bump hang free after months of stuffing it into costumes which fit me at the beginning of shoot schedules in July but were not so easy to zip up by mid September! And kudos to my style saviours @who_wore_what_when for coming up with innovative ways to cover it up! Wearing @cottonworldlive For @missmalini (see insta story for link)

When asked if there’s a wedding with Guy Hershberg on the cards,Kalki Koechlin said that they considered getting married for the purpose of parental rights and nationality issue, however she doesn’t wanna rush it because of societal pressures. She further added, “. We will see when the time feels right. It will be a registration and a quiet family gathering.”

Priyanka Chopra Shares Her Bedroom Secret With Husband Nick Jonas; Says ‘He Can’t Start His Day Without..’
Shocking: Rakhi Sawant Ends Marriage With NRI Ritesh, Shares Crying & Sad Posts
Sunny Leone On Flying To The US With Family Amid Coronavirus Lockdown; Says, It Was A Tough Decision To Leave Mumbai
Bollywood Celebs Jodi Who Played Siblings As Well As Lovers On Screen