Actress Kamya Panjabi holds a strong opinion on social media. Being a Bigg Boss contestant herself, she keeps sharing her views on the participants’ gameplay in every season through her tweets.

Recently, the Shakti actress came out in support of Jay Bhanushali and condemned Pratik Sehajpal for the fight between the two. Jay abused Pratik’s mother during one of their fights on Bigg Boss 15. This did not go down well with some of the netizens and they started reminding Kamya of how she got upset when in her season, Armaan called her ‘divorcee.’ 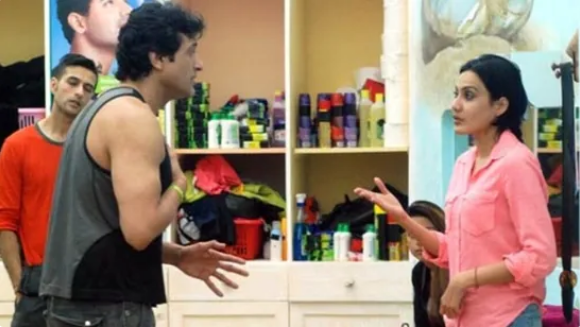 Replying to the same, Kamya said that she did not get aggressive or destroy any property in the Bigg Boss house even after being called names. She also mentioned that Armaan not only called her divorcee but also hurled abuses on her and all she did was cry alone.

The Twitter user wrote, “Armaan ke ‘Divorcee’ bolne pei aapne poora ghar sar pei chadha liya tha (When Armaan called you a ‘divorcee’, you raised a hue and cry)… Even at that time I was against Armaan… But try to understand, this is Maa ki gaali, to a guy who is raised by single Mother.. Cricket ko Bigg boss se compare kyu (Why are you comparing cricket and Bigg Boss) #BiggBoss15 #BB15 #PratikSehajpal.”

“Maine koi aggression nahi dikhaya naa koi bb ki property todi, warna dono meh fark kya reh jaata! Aur gaali toh gaali hai na cricket ho ya bb (I did not get aggressive or destroy any property in the Bigg Boss house because if I did, what would the difference between us be? And abusive language is abusive language, be it cricket or Bigg Boss),” she added. 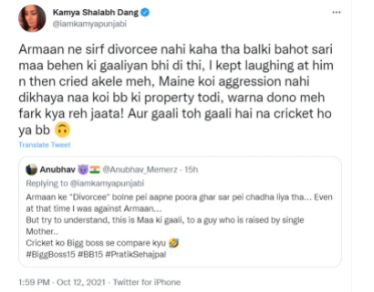 For the unversed, Kamya was earlier married to Bunty Negi and has a daughter, Aara, with him. She is now happily married to Shalabh Dang.