Fans were shocked when actor Ayushmann Khurrana released his most recent photos from an unidentified place. He posted photos of himself simply with a towel hanging loosely around his waist on his Instagram account on Monday. He captioned it, asking, “Where am I? only wrong answers”.

Many followers claimed that the images strongly resembled Ranbir Kapoor’s iconic towel scene from Saawariya. Ayushmann may be seen in the photos posing shirtless and facing the camera while standing on a balcony. The following image provides a close-up view of his face.

Siddhant Chaturvedi responded to the post by writing, “Secs before the Saawariya drop.” Mere kamre mein, Kartik Aaryan continued, alluding to Ayushmann’s caption for the picture. Sonakshi Sinha remarked, “Paris,” while Arjun Kapoor answered, “Andheri.” In my heart,” many of Ayushmann’s followers wrote in jest.

The most recent Anubhav Sinha film, Anek, featured Ayushmann. He played an undercover policeman in the movie. The conflict in Northeast India between the government and militant organizations is the central theme of the film. The movie was released in May with mediocre reviews and a sluggish start at the box office. 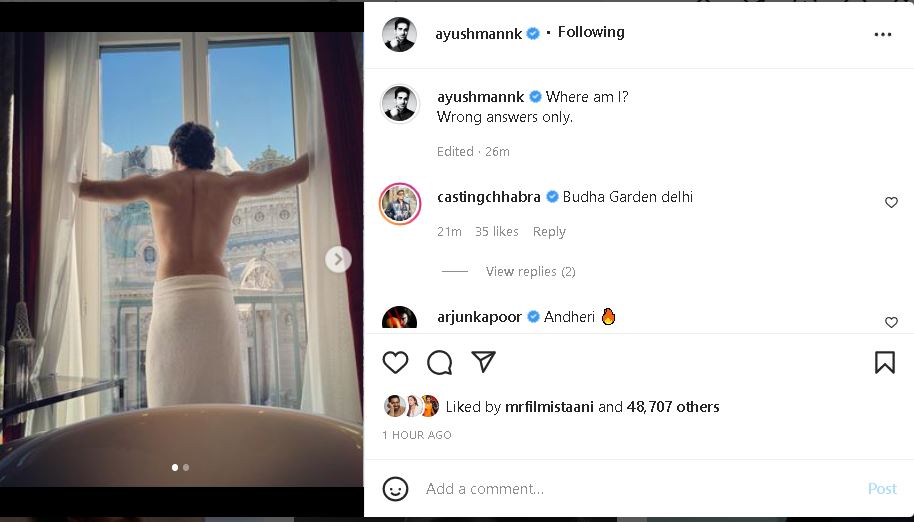 Before the movie’s debut, Ayushmann had said this about Anek: “Anek honours the spirit of actually being an Indian. With this film, Anubhav Sir is pushing the boundaries and establishing a standard for passionate storytelling. I was forced, both physically and emotionally, to accomplish things that I had never done before by my character Joshua. I gave this character my all-out effort to bring to life all Anubhav had in mind for the movie with the correct direction and training.

The following movie starring Ayushmann and Rakul Preet Singh is Doctor G. In addition to this, he is currently working on An Action Hero. The Anirudh Iyer-directed movie, which also stars Jaideep Ahlawat, is slated for release in December.