Bollywood’s King Khan, the one and only Shahrukh Khan attends a Ask me Anything session on Twitter. Bollywood’s most precious gem reveals many things while chatting with fans. King Khan also revealed the release date of the most awaited movie ‘Pathaan’. For the last several months, the Khan family was trolled and go through a media trial as well due to the arrest of Aryan Khan in a drug case. As things get normal and Khan family also comes back to their daily routine. After a long time, SRK decided to have a ‘Ask me Anything’ on Twitter. This session is very popular among fans because through this, they can ask anything to their Ideal celebs. While chatting with Fans, one fan asked SRK if he has watched Aamir Khan’s to-be-released film Laal Singh Chaddha?, SRK has an ROFL reply. SRK’s reply was: “Arre yaar Aamir kehta hai pehle Pathaan dikha (Aamir says to show him Pathaan first).” 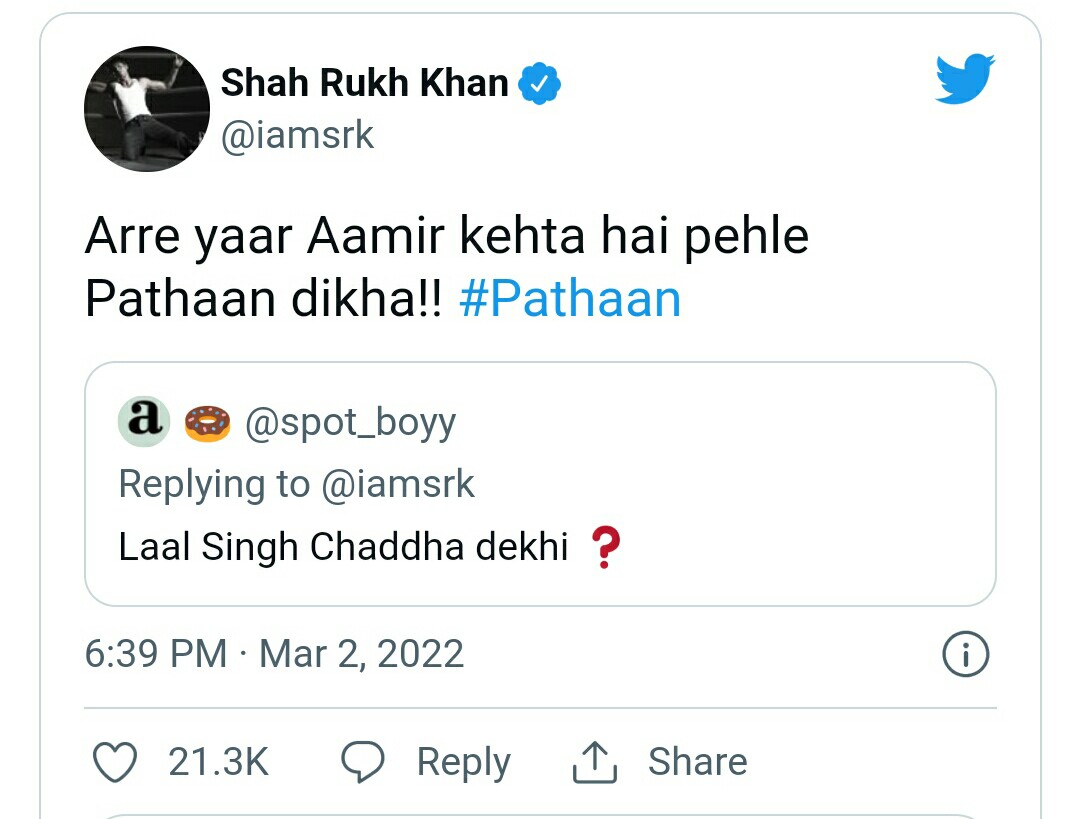 Amir and SRK rarely shared the screen and were even not captured in any event or party together. Last year, King Khan was also organised a Ask me Anything session for his Fans. During the session, SRK was asked about his favourite movie featuring Amir Khan.SRK reveals the top five movies featured Amir Khan, Raakh, Qyamat se Qyamat tak, Dangal, 3 Idiots and Lagaan.

However, Mr Perfectionist and King Khan were worked on the same project in 1993′ Pehla Nasha. The movie was directed by Ashutosh Gowarikar, but in the entire movie there was no clash of the stars and even the movie had no single scene in which SRK and Amir can be seen together. At last, the session is over. SRK tweeted to his fan, “Ok boys and girls time to get back to work. Have loads of stuff to finish… YRF and Sid (filmmaker Siddharth Anand) make me work too much. Thank you again for loving #Pathaan so much on behalf of everyone. Will see you soon. Love you all).”