When appearing at the Kapil Sharma Show on Saturday, Rani Mukerji said she and Shah Rukh Khan couldn’t stop laughing while filming Veer and Zara. She appeared in the second half of the movie, Shah Rukh was shown as an old man suffering in prison with false accusations, and she played his lawyer. 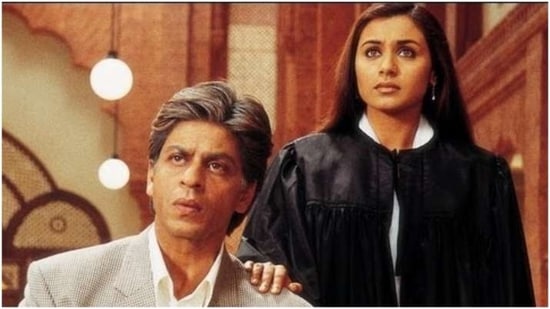 Rani always made romantic scenes with Shah Rukh, and there she said he was standing in front of her, dressed as an old man with white hair and a thick white beard. She revealed that they kept laughing until Yash Chopra scolded her.

“Ab main Shah Rukh ke saath scene karoon toh mujhe unki aankhon mein dekh ke romance karna hai. Ab woh nahi kar sakte kyunki mujhe pita wali feeling laani hai, unko beti wali feeling laani hai, aur woh ho hi nahi rahi hai humse (If I do a scene with Shah Rukh, I want to look into his eyes and romance him. That’s not possible because we have to evoke a father-daughter feeling and we both could not do that),” she said.

“Hum dono se nahi ho rahi hai. Aur hum hase jaa rahe hai. Finally, Yash uncle ne itna daanta hume, hum dono itne ghabra gaye ki humne bola, ‘Nahi nahi, abhi hume theek se karni padegi.’ But woh time pe itna mushkil hua tha (We both could not do it. We kept laughing. Finally, Yash uncle scolded us so much that we got nervous and vowed to do it properly. But at that time, it was very difficult),” she added.