Mira Rajput Gets Slammed For Not Carrying Her Own Umbrella; “Who She Thinks Of Herself” Says The Trollers

Mira Rajput gained limelight after she married the top Bollywood actor Shahid Kapoor at the age of 22 only. She was around 13 years younger than the star and within a year, had her first baby, Misha. And around two years later, Mira had her second kid Zain. Now, she is busy hopping one event to another with hubby Shahid Kapoor. Recently, the Mira was spotting walking while one of the persons around her was carrying an umbrella for her.

Mira has always been trolled for something or the other ever since she got married to Shahid Kapoor. She is always been clicked by the paparazzi. This time, Mira was spotted on her birthday lunch. As soon as the pictures and videos went on the internet, some people liked her casual look for the lunch while some noticed that Mira is not carrying her umbrella herself. And they started trolling her by their mean comments. Have a look: 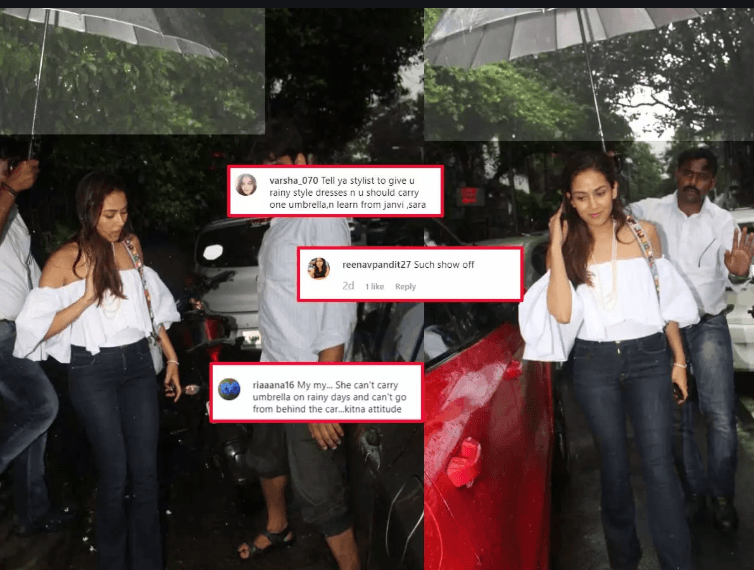 As one of them said, “what is her achievement except marrying Shahid Kapoor”, the other proclaimed, “I don’t know this girl, what does she think of herself?”. The other user commented, “why she can’t carry her umbrella or at least can go from behind the car”, while the other said “such a show off”

Mira has always been an easy target for trolling. Last year, Mira Rajput Kapoor revealed about her first-ever TV commercial video for Olay skincare products on her Instagram handle. She had captioned it, “Being a mother doesn’t mean you stop being yourself right? I took the #Olay #SkinTransformation #28Daychallenge Here’s my #Reborn story. what’s yours? @olayindia”. And she was mercilessly trolled. As one of the trollers commented, “@shahidkapoor wanted to marry a normal girl who had nothing to do with the industry lol he married a wannabe who only wants to use his name and get ads and make Money..IRONY”, the other said, “@shahidkapoor paisa khilaake ad karwayaa aur khud hi stunned bhi hogaye Kya?!!” Have a look: What do you think? Is it okay to troll her?