One of Bollywood’s most prominent couples is Alia Bhatt and Ranbir Kapoor. For many reasons, RK and Alia fondly referred to as Raalia by their fans, are always the center of attention. Indeed, footage of Ranbir Kapoor attending a Toolsidas Junior screening has gone viral. The internet was delighted by RK’s reaction to the media’s query about his marriage.

Ranbir Kapoor isn’t one to show up at public events regularly. He did, however, make an exception for the Toolsidas Junior screening. It was his late uncle Rajiv Kapoor’s final film. Ranbir Kapoor was in attendance with his mother, Neetu Kapoor. He was dressed casually in jeans and a long-sleeved shirt.

Ranbir was photographed conversing with Ashutosh Gowariker and Bhushan Kumar after the screening. “Bye RK, Shaadi mein milte hain,” a paparazzo sarcastically informed him as he walked out of the venue (see you at the wedding). “Kiski (whose wedding),” Ranbir instantly responded, “and walked out of the theatre without looking back. “Luv (Ranjan) sir ki,” screamed the paparazzo.” 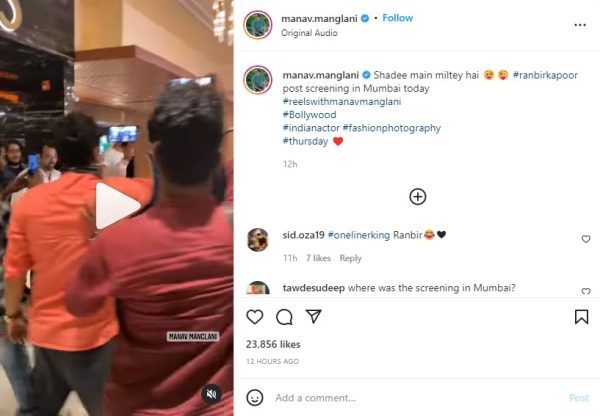 Luv Ranjan, a filmmaker, is slated to marry his long-time lover on February 20. ‘Pyar Ka Punchnama’ and ‘Sonu Ke Titu Ki Sweety’ are among the films made by the director. Following the wedding, he will wrap up his forthcoming tasks.

Fans remarked on how attractive he appeared in the video. Ranbir Kapoor has shed a significant amount of weight and looks as handsome as ever. Ranbir and Alia’s wedding is now generating news. According to sources, the pair plans to marry in April of this year. It has yet to obtain an official response from the duo.

On the work front, Alia Bhatt and Ranbir Kapoor will star in Ayan Mukerji’s Brahamstra, which also features Amitabh Bachchan.