Nora Fatehi And Sidharth Malhotra To Star In The Remake Of Manike Mage Hithe Song – Exclusive!

Nora Fatehi and Sidharth Malhotra have reunited for another dance routine. The popular dancer will be seen shaking a leg with Sidharth in his next film Thank God on the Hindi version of Yohani’s viral Sri-Lankan song Manike Mage Hithe, according to a news daily.

Yohani Diloka de Silva, the Sri Lankan singer whose viral song Manike Mage Hithe caught the Internet by storm, is preparing to make her Bollywood debut. She’ll give her vocals to the Hindi version of the song for the upcoming slice-of-life comedy film Thank God. 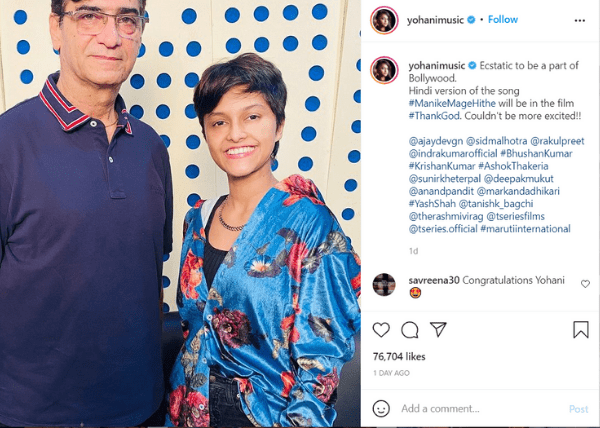 Ajay Devgn also stars in the film, which is directed by Indra Kumar and is a slice of comedy. According to an ETimes report, Nora and Sidharth’s chemistry in the song will ignite the dance floor. Malhotra-romance Singh comes to a standstill once the former dies and meets Yamraj in the film (Devgn). On Tuesday, the film’s producers announced the news by welcoming Yohani to Bollywood. Thank God is set to be released next year.

Yohani has received a lot of positive feedback for her viral song. It’s a Sinhala song from the year 2020, sung by Satheeshan Rathnayaka. She was famous for her rap cover of Deviyange Bare before she became famous all over the world. The 29-year-old is also well-known for her TikTok videos. She also performed on Salman Khan’s Bigg Boss 15 program, where she sang for and with the superstar on stage. The singer will also be featured on Ranveer Singh’s game program The Big Picture, where she will entertain the audience. In the meantime, Sidharth is enjoying the success of his recent film Shershaah, which also stars Kiara Advani. Nora and Sidharth were seen in the remix version of the song ‘Ek Toh Kam Zindagani‘ in Marjaavaan.