Prabhas Arrived With Home-cooked Food For Amitabh Bachchan, Big B Praised Him Like This!

Amitabh Bachchan is currently shooting for his upcoming film ‘Project K’ with Bahubali star Prabhas. Where he is seen enjoying a lot of Prabhas’s company. Amitabh keeps sharing this information with his fans on social media. Recently, Prabhas reached the sets with his homemade food for Big B. Amitabh was so impressed by this actor’s talk that he is not tired of praising him.

Megastar Amitabh Bachchan shared this information on his official Twitter account while praising Prabhas. Sharing the post, Amitabh tweeted, “Bahubali Prabhas. Your generosity is beyond measure. You brought me the most delicious home-cooked food. You also bring the food in such quantity to feed the entire army. More Those special cookies are beyond fabulous and beyond digesting your complements.” 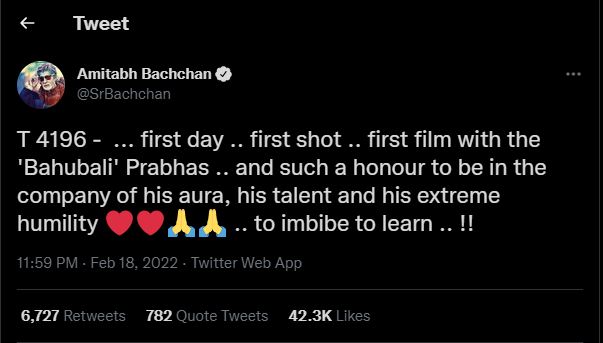 Even before this, Amitabh Bachchan has been seen adoring Prabhas, when both shot their first shot for the film. Amitabh had tweeted praising Prabhas’s acting and his Aura, “… the first day first shot ‘Bahubali’ first film with Prabhas and this being in his company’s aura. There is an honor, his talent and his utmost humility assimilated to learn…!” 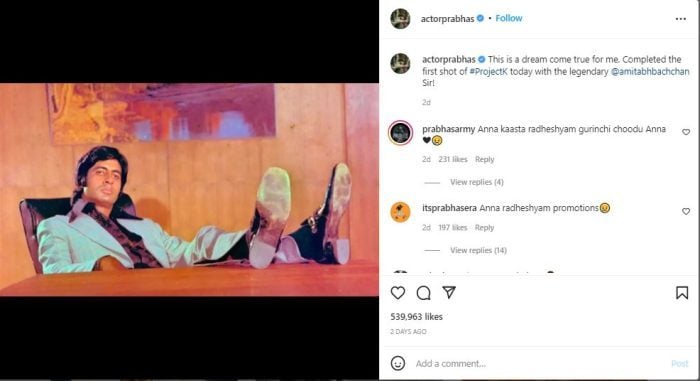 Prabhas also praised Amitabh Bachchan and shared a picture from his old film on his Instagram account and wrote, “It’s like a dream come true for me. Today ‘Project Ke’ with Legendary Amitabh Bachchan sir.” Completed the first shot!” For your information, let us tell you that ‘Project K’ is a science fiction film and Nag Ashwin is directing this film. This film is being made on Pan India level. Apart from Amitabh Bachchan and Prabhas, Deepika Padukone will also be seen in the lead role in the film. The shooting of the film is currently going on in Ramoji Film City, Hyderabad.