Since the time Kareena stepped into the world of social media through her Instagram debut, every story she posts becomes a talking point for media portals. The actress, despite being away from the screens keeps her fans and well-wishers engaged through the content she shares on Instagram. Recently, Kareena took to Instagram Stories to share a picture of her dinner. The insane meal that the actress was binging on was biryani, sent over to her and Saif by the latter’s Adipurush co-actor Prabhas.

Alongside the picture of her dinner, Kareena wrote, “When Bahubali sends you biryani it’s gotta be the best. Thank you Prabhas for this insane meal (sic),” followed by the Adipurush hashtag. For the unknown, Prabhas and Saif Ali Khan will be seen together in Adipurush, an adaptation of the Hindu epic, Ramayana. 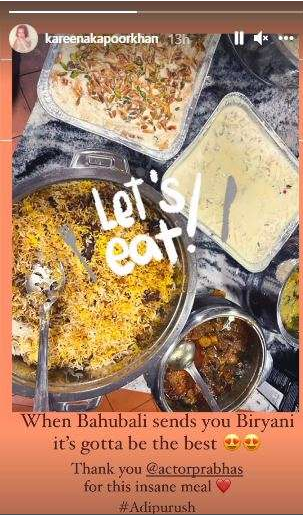 Prabhas is a big foodie himself and he also loves to share food with his co-actors. Earlier, he also treated Shruti Haasan with great food on the sets of their film Salaar.

Talking about his character, Prabhas had said, “Every role and every character comes with its own challenges, but portraying a character like this comes with tremendous responsibility and pride. I am very excited to portray this character from our epic especially the way Om has designed it. I am sure the youth of our country will shower all their love on our film.”

Shahid Kapoor Is To End 2021 With A Boom As Jersey Is All Set To Release On This Date!

Saif, while talking about his role in Adipurush had said that the movie will ‘humanize’ Lankesh. This earned him a lot of flak online. Manoj Muntashir, the writer of the movie, defending Saif’s comments, had told in an interview to Mid-day. “Saif was recently trolled for his remarks about humanizing Lankesh, but there is nothing offensive in the film. Saif was misunderstood. Raavan is perceived as an all-black figure, but in our film, he will be seen in all his shades. He will be shown as a flamboyant king, who was also cruel and sadistic.”

The film is directed by Om Raut of Tanhaji: The Unsung Warrior fame. The shooting of the film was halted due to the second wave of Covid-19, but the cast resumed it after the impact of it got lessened. The film has a massive budget of Rs 400 crore. It will be released in multiple languages.