Mothers are like your best friend. They will always stand by you. From being your emotional anchor, secret keeper to your worst and best critic, they do justice to every role. There might be times when you do not agree with them on certain things in life, but it won’t stop you from loving or admiring them.

One such mother is Saif Ali Khan’s ex-wife, Amrita Singh. Amrita is one of a kind and she is a loving mom. Mother Amrita, who shares a very deep and strong bond with her kids Sara Ali Khan and Ibrahim Ali Khan always manages to keep her family together.

During a recent interview, Sara spoke about her father’s second marriage to Kareena Kapoor and mentioned her Abba’s marriage to Bebo. “When my father just got married to Kareena, I remember going to the locker with my mother and taking out jewellery and saying which jhumkas should I wear? She called Abu and Sandeep and said, ‘Saif is getting married and I want Sara to have the most beautiful lehenga.’” 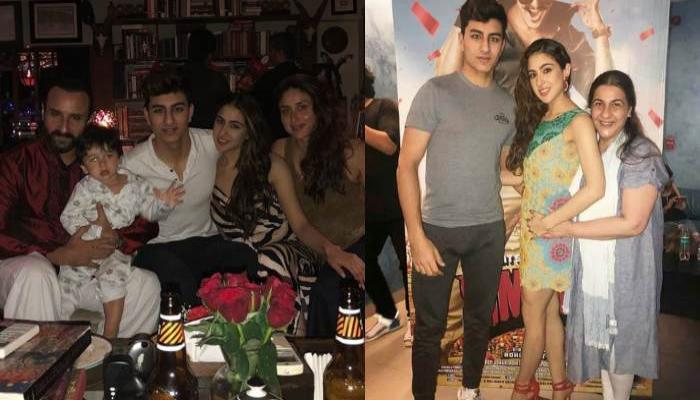 The Simmba actress said that it is because of her mother Amrita that she has such a warm and loving bond with Kareena. Talking about the same, Sara stated, “It’s also easy for me to love and accept Kareena because I have a mom, who makes me feel everything’s fine. She got me ready for my father’s wedding with Kareena. So, when you have a mother saying, ‘Yeh earrings mat peheno, doosri chandbali peheno’ and if that’s the vibe at home, then you’re comfortable enough to take anything on.”

Actress Sara Ali Khan and Brother Ibrahim are one of the cutest siblings of Bollywood. In the recent interview, Saif’s son Ibrahim spoke about the bond he shares with his sister, Sara. He shared that unlike most of the siblings, they rarely fight. Elaborating on the same, he remarked, “The relationship we (Sara and I) share is just perfect – we rarely fight and that’s perhaps because we have a five-year gap between us. On occasions that we do, it’s over the stupidest things. We are very close to each other and love each other a lot.”

Not just this, Sara Ali Khan and Ibrahim Ali Khan’s mother opened up about her kids. She had described Sara as “a very God-loving child (who) has immense respect for every belief. She is also an extremely disciplined girl, be it her work or her mind and body, I see the effort she puts in every day to keep the balance and that’s commendable.”

Ibrahim has always been compared to his dad, Saif Ali Khan. He has always been in news for striking similar looks with dad, Speaking about his uncanny resemblance with his abba, Ibrahim shared, “There are scenarios where people – whether it’s an old relative, my mother or a family friend – tell me, ‘Oh my god, you’re just like him (Saif) and he does that too!’ I guess maybe we are similar but I wouldn’t know that… But regardless, he is special to me. He is also my guide when it comes to man-to-man conversations.”

On the work front, Sara is gearing up for her next Imtiaz Ali directorial ‘Aaj Kal’ where she will be seen opposite her boyfriend Kartik Aryan. Later she will be seen in David Dhawan’s ‘Coolie No. 1’.

Prego Woman Kareena Kapoor Khan Showers Love On Another Mom-To-Be, Anushka Sharma
Aishwarya And Aaradhya To Stay In Hospital While Amitabh And Abhishek To Get Discharged
Pooja Ghai From ‘Kyuki Saas Bhai’ Gets Married For The Second Time, Celebrates With 18 YO Son
Varun Dhawan And Shraddha Kapoor To Battle 10 International Dance Troupes In Street Dancer 3D