Bollywood actress Sara Ali Khan visited the Kamakhya Temple in Guwahati, Assam on her recent trip there. After seeking blessings from the temple, the actress took to Instagram to share pictures with her fans.

Dripping with serenity and peace, her pics showcase the natural beauty of the stone-hewn temple and the carvings that it is popular for. Sara Ali Khan captioned her clocks with the hashtags #peace, #gratitude, and #Blessed. Her simplicity has won her fans over once again! 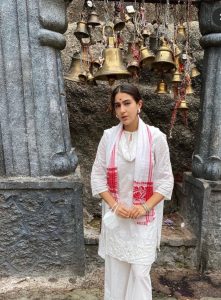 Sara Ali Khan is looking fresh as a daisy in plain white kurta and pyjama. She styled her hair in a simple low ponytail. Sara kept her look simple and non- glamorous. 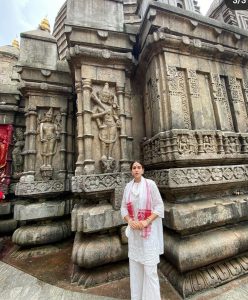 Assam’s Kamakhya Temple is located in the Nilachal Hills of Guwahati and was recently reopened for tourists.

According to reports, she is shooting for her upcoming documentary film ‘Veerangana’ in Assam. Sara was also spotted alongside Assam Police Commandos at the Mandakata  commando Battalion Training School in North Guwahati. 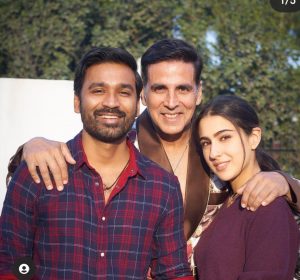 On the work front, Sara Ali Khan will be next seen in ‘Atrangi re’, opposite Dhanush and Akshay Kumar. While there was a lot of chatter about the age difference between Kumar and khan, the actress shared how the story finds it fit for the characters. The release date of the film has not been specified yet. With music by AR Rehman, ‘Atrangi Re’ went on floors last March before the coronavirus pandemic halted its shoot. The film’s shoot resumed in Madurai last October and followed it up with a schedule in Delhi. 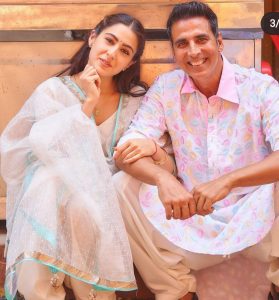 ‘Atrangi Re’ went on floors in March 2020, in Varanasi. The team resumed shoot post lockdown in Madurai, followed by schedules in Delhi and Agra. The film is slated to release on August 6.