Shibani Dandekar & Farhan Akhtar Made Their First Public Appearance After Their Marriage!

Farhan Akhtar and Shibani Dandekar made their first public appearance as husband and wife on Monday evening, almost two days after exchanging vows in a small ceremony. Farhan and Shibani married in front of their closest friends and family members at Javed Akhtar’s farmhouse in Khandal.

The couple, as well as their friends and family, gathered at Farhan and Zoya’s Mumbai home for the occasion. Farhan and Shibani wore matching gold and blush pink ensembles and looked just lovely.  On the one hand, Shibani wore a pale pink embroidered saree and heavy-duty jewellery. Farhan, on the other hand, was dressed in a pale pink ethnic outfit. They looked incredibly lovely as they posed for the camera. 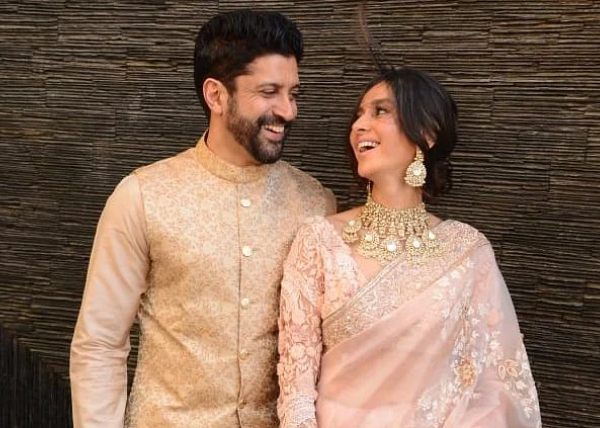 The pair welcomed the paparazzi into Farhan’s home and posed for their first official photographs as husband and wife. Not only that, but Farhan and Shibani, as well as their employees, gave out goodies to the photographers. Their civil wedding was set for February 21st, which is today. Their friends and family gathered at Farhan and Zoya’s Mumbai home for the occasion. The paparazzi also photographed Farah Khan Kunder, Sajid Khan, Ritesh Sidhwani, and others at their home.

Farhan looked great in a black tuxedo with a black bowtie and matching sunglasses on the day of his wedding. The bride chose a light red-and-pink fitting gown with a crimson veil for her wedding. She went for a wavy, open hairdo. 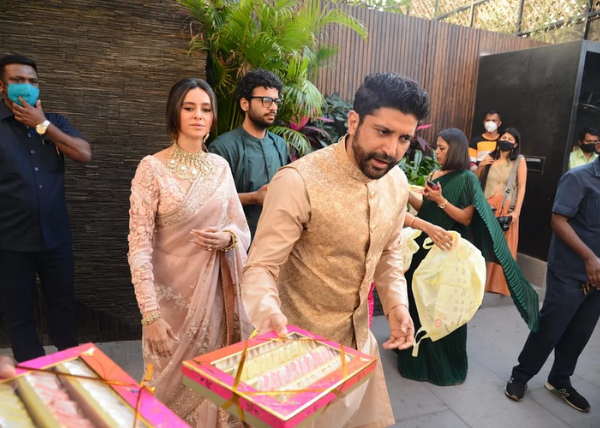 Farhan and Shibani met on the set of the reality programme ‘I Can Do It,’ which the actor-director-singer presented in 2015. Soon after, the two began dating and made their first public appearance together at Ranveer Singh and Deepika Padukone’s wedding reception.

Farhan previously married Adhuna, a hairdresser with whom he had two kids, Shakya and Akira.