Sunny Deol Announces The Schedule Wrap Of ‘Gadar 2’ – Deets Inside!

Actor Sunny Deol announced that he has finished filming the first schedule of his film, titled ‘Gadar 2’. Gadar 2 is a sequel to 2001’s blockbuster movie “Gadar: Ek Prem Katha” and it was announced in October. Anil Sharma is directing the sequel to the movie. He’s the one who directed the movie titled ‘Gadar: Ek Prem Katha’. The team of Gadar 2 shot the movie in Himachal Pradesh and wrapped its schedule in 25 days.

The actor featured as ‘Tara Singh’ shared pictures from the sets on Instagram. Sharing the pictures, the actor wrote, “Only a fortunate few get to bring amazing characters back to life. Introducing Tara Singh, 20 years later! We wrapped up the first schedule of ‘Gadar 2’. Feeling blessed to relive the role again.” The movie Gadar was a partition-set drama, and it narrated the love story of Tara Singh (a Sikh) and Sakina, a Pakistani Muslim girl. The sequel is produced by Zee Studios and it will reunite Deol with Ameesha Patel. The film is set for release in 2022. 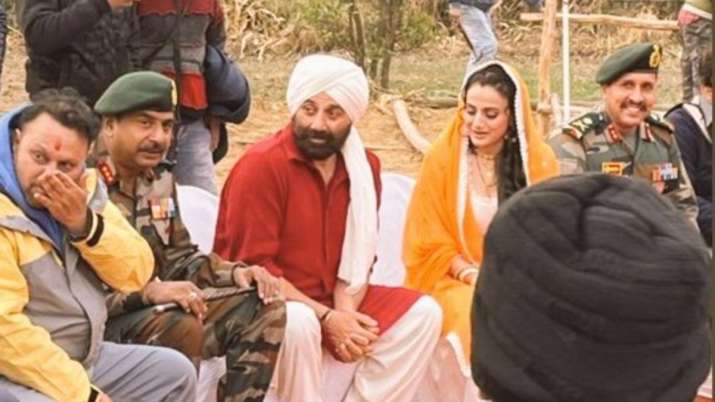 Deol made his debut opposite fellow debutante Amrita Singh in Betaab (1983), for which he acquired a Filmfare Best Actor Award nomination. Subsequently, he went directly to being a famous person in several successful movies in the Nineteen Eighties and Nineteen Nineties and is considered one of the most successful stars of that time. With his portrayal of a new boxer wrongly accused of his brother’s homicide in Rajkumar Santoshi’s Ghayal in 1990, Deol won extensive popularity and reward and received the Filmfare Award for Best Actor and the National Film Award for Special Jury Award/Special Mention (Feature Film). His portrayal of an attorney in the movie Damini – Lightning (1993) received him the National Film Award for Best Supporting Actor and the Filmfare Award for Best Supporting Actor. Gadar: Ek Prem Katha (2001), wherein Deol portrayed a lorry driver who falls in love with a Pakistani Muslim girl, became the highest-grossing Bollywood movie ever at the time of its release and garnered him a Filmfare Best Actor nomination.