Swara Bhaskar compares Hindutva to Taliban; Now there is a demand for the arrest of the actress

The Taliban have taken over Afghanistan. The pictures and videos coming from there are quite heartwarming. Apart from the political personalities of India, film personalities are also giving their feedback on the situation in Afghanistan. Bollywood actress Swara Bhaskar has also given her reaction in this matter, but she is getting trolled fiercely. Not only this, there is a demand to arrest Swara Bhaskar. 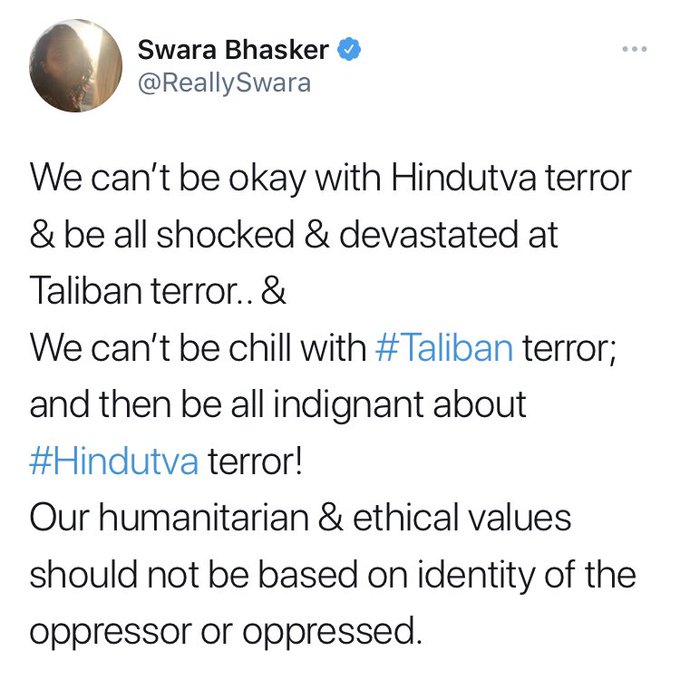 In fact, Swara Bhaskar compared the Taliban to the Hindutva of India. Since then she is getting trolled fiercely on social media. After demanding his arrest, ‘Arrest Swara Bhasker’ is trending on Twitter. Swara Bhaskar wrote in her tweet, ‘We cannot be okay with Hindutva terror, and everyone is shocked and devastated by Taliban terror. We cannot sit still with Taliban terror and then get angry about the terror of Hindutva. Our human and moral values should not be based on the identity of the oppressed.’ 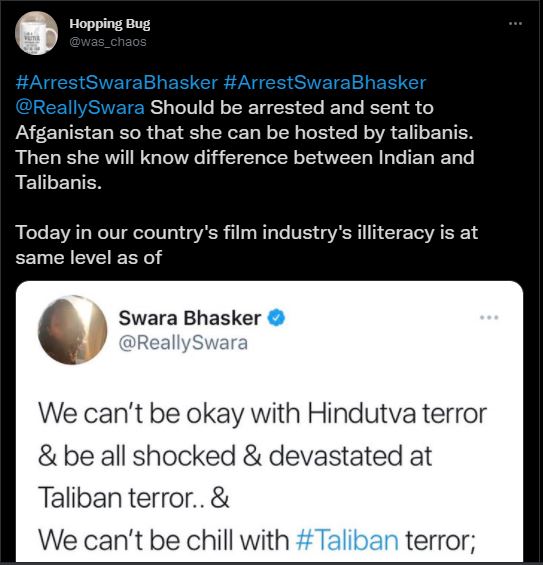 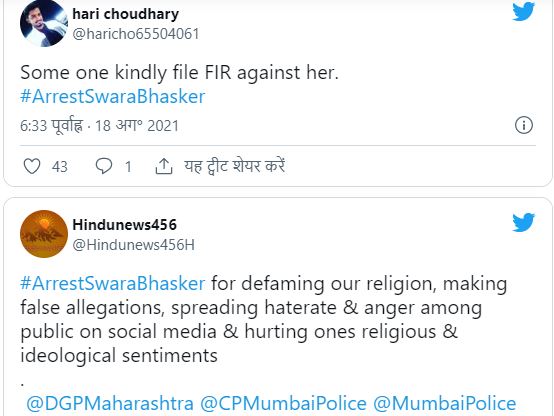 Swara Bhaskar is getting trolled fiercely after this tweet. Twitter named Hopping Bug wrote, #ArrestSwaraBhasker #ArrestSwaraBhasker Swara Bhaskar should be arrested and sent to Afghanistan so that she can host Talibanis. Then she would know the difference between Indians and Talibanis. Today illiteracy is at the same level in the film industry of our country.  Apart from these, many other social media users are trolling Swara Bhaskar by commenting. The Taliban have taken control of the whole of Afghanistan. On 15 August, the Taliban raided the capital, Kabul, and captured the Rashtrapati Bhavan. Before the occupation, President Ashraf Ghani had left the country. After capturing the whole country, different pictures and videos of Talibanis are coming out, in which they are seen using the country’s property. Swara Bhaskar remains in the discussion less for her films and more for her rhetoric. Whenever she is trolled on social media, she also gives her befitting reply to the trollers. He was last seen in Netflix’s web series Bhaag Beni Bhaag.