Taapsee Pannu began her week by defending her film Haseen Dillruba against a fresh wave of criticism. Taapsee responded to tweets criticizing the film’s perceived endorsement of toxic behavior and misogyny. Haseen Dillruba, directed by Vinil Mathew, has received mixed-to-negative reviews from critics. The film, released on Netflix on Friday, sits at a ‘rotten’ 38% rating on review aggregator site Rotten Tomatoes, based on eight reviews. 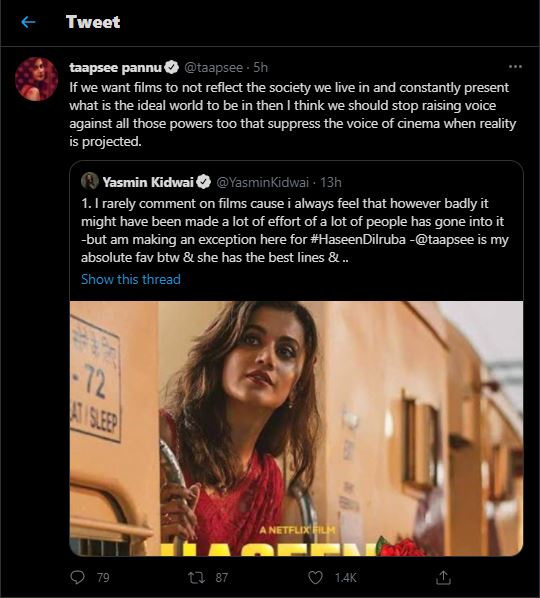 Taapsee Pannu responded to filmmaker and municipal councilor Yasmin Kidwai’s tweet commenting about the film’s depiction of ‘toxic masculine love’, and a woman needs to prove herself in the kitchen while being denied any rights for herself’. The actor wrote, “If we want films to not reflect the society we live in and constantly present what is the ideal world to be in then I think we should stop raising voice against all those powers too that suppress the voice of cinema when the reality is projected.”

When a journalist pointed out to Taapsee that ‘showing toxicity and propagating it are two different things, the actor wrote that the journalist has a ‘biased lens’ and didn’t ‘remotely’ understand the character, Rani. She also commented on the film’s ending, which, spoiler alert, shows Rani and Rishu get away with a crime. “I don’t think showing a flawed character doing wrong to another flawed character is called glorification. N if at all u do that, the repercussions of that are also glorified. It’s your perception that makes man the hero, mine made both characters suffer for their wrong,” she wrote, adding that her taking a stand for herself isn’t limited to social issues.

A fan praised her for taking a stand for herself. “Taapsee, all u did a fantastic job! Watched something fresh and original in a long time. Kudos to the entire team. Wondering why the first-day reviews were negative. Your PR team needs to work harder!!” the fan wrote. Taapsee replied, “I believe in working hard myself not my PR team. The audience response is a victory in itself.” Taapsee had previously accused a critic of making a personal comment about her in their review. Haseen Dillruba also features Vikrant Massey and Harshvardhan Rane. The film is written by Kanika Dhillon and co-produced by Aanand L Rai.