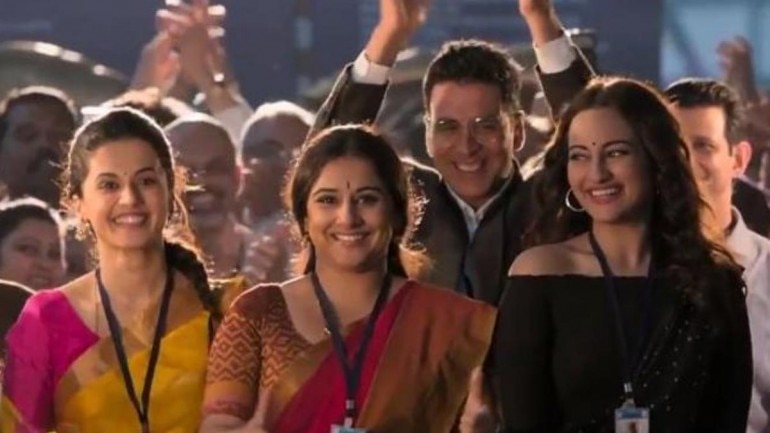 The science fiction drama helmed by Jagan Shakti is set to release this August 15. Mission Mangal, the incredible, true story of a scientist, Rakesh Dhawan, played by Akshay Kumar and Tara Shinde played by Vidya Balan who lead a motley team of scientists at ISRO who overcome their personal challenges and failures to serve as the brains behind one of the greatest mission in history: the launch of India’s first satellite to Mars, a stunning achievement that restored the nation’s confidence. The tale is of ordinary people doing extraordinary things and inspiring generations to dream big and achieve the impossible.

The story of India’s mission to Mars is the tale of women scientists of the country. The movie is here with real life examples that women are the driving force, this film might bring the message of women empowerment through cinema. The film stars  Vidya Balan, Tapsee Pannu, Sonakshi Sinha, Nithya Menen as the women who contributed to Mission Mangal. We’ll see Kirti and Sharman in the side roles.

The lively Bollywood actress is here with her power pack performance. The actress has shared the screen with one of the highest paid actors, Akshay Kumar, twice in Baby and Naam Shabana. In a recent interview with India Today, Tapsee was questioned about her on-set occasion with Akshay. She replied:

Of course, the comfort level increases with every film you do with a co-actor. Be it Mr (Amitabh) Bachchan with whom I did Pink and then Badla, or with Akshay sir.

Unfortunately, I have not done a film in which there is a full-fledged role of us together. In Baby, I had a small role and he had more screen space. In Naam Shabana, it was the other way round. In Mission Mangal, we both have limited screen space. It is not a two-hour role for either of us. So I hope in the future, I get a film where I have a full-fledged role with him.

The humble actress is pretty secure and confident about herself. In the interview she was further questioned about not playing the lead in Mission Mangal or her next Saand Ki Aankh. She replied, “I think I am pretty secure as an actor. I have done all kinds of films. I have done films where I am the only lead, where I have shared screen space with a male protagonist, where there is a big ensemble and I have done films with a senior protagonist. I don’t think I have had a problem. As I told you, my concern has always been, ‘How interesting or significant is my part?’ My concern is never the screen space in the film.”

After the teaser release Akshay posted a picture with the film cast and the real Mission Mangal team at ISRO to which he captioned, “Be it making a home or launching a successful space mission, women know it all! Celebrating the power of women scientists : #MissionMangal is their story!”

Kashmera Shah & Krushna Abhishek Sealed Inside Oberoi Springs: Share Their Horrifying Experience
‘I Would Not Convert Or Change My Religion Ever But I Respect Shahrukh’s Religion, Says Gauri Khan
Isha Ambani Sharing A Warm Dance With Daddy Mukesh Ambani Shows Their Strong Bond
Ayushmann Khurrana Is Going To Take A Long Break From Movies Says “His Family Needs Him”