Things That ‘Sherni’ Left Us To Wonder About

Amazon Prime Video’s latest original movie Sherni is now streaming on the OTT platform. It will turn all the monotonous streaming down with its fresh approach. Directed by Amit Masurkar (Newton, Sulemani Keeda), a stellar cast including Vijay Raaz, Neeraj Kabi, Ila Arun, Sharat Saxena, and Brijendra Kala and of course none other than our bossy queen- Vidya Balan.

The movie left us in wonder how such stories can raise so many poignant questions about our world and society in general. Not only this, but the movie has defied all the stereotypes. Vidya Balan has always challenged the character down so well, her power-packed performances aren’t unpredictable.

“I did not set out to break stereotypes, but I think through my experiences in life, especially as an actor, I have realised I am not going to let anything come in the way of me being an actor,” said Vidya.

Women in a “Man’s World” 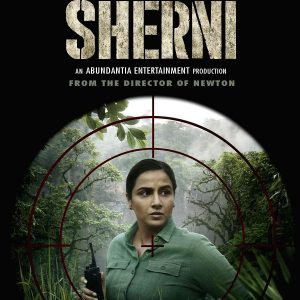 Vidya Balan’s character in the movie is that of an authority figure. It has been brought in to deal with the Tigress situation. Yet, people seem surprised that a woman was chosen for this. Traditionally speaking, the administrative side of wildlife and forestry has been a male domain. When a woman steps into this world, suddenly she has to deal with the male gaze which can range from patronizing, to insubordination to dangerous at times. She believes in recognizing talent in place of calling it in the name of ‘gender’. 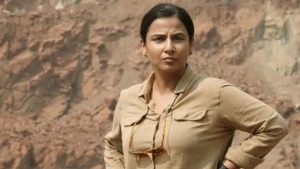 The premise of the movie shows villagers living at the edge of a forest. They are facing problems due to a tigress who’s been attacking them and their farm animals. While they’re afraid of the wild animal and are appealing to the authorities to “do something about it”. We also see a conservation officer talking about how the most important thing is to protect the tigress. No one’s in the wrong here. The farmers will farm. Carnivores will hunt. But as wild areas are shrinking in size and human settlements move closer to forests, such conflicts will arise. There are always two sides to the story in such matters.  A wildlife conservation conscience just exists in words and are seldom practised seriously.

‘Men only’ Jobs are an Outdated Notion 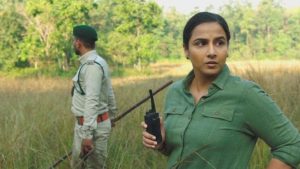 People should not be surprised to see women step into professions that were once male-dominated. Gender has nothing to do with how hard a person can work, or how smart they can be in their jobs. Pulling up one’s sleeves and getting down and dirty out in the field – women can do that too. It’s refreshing to see women in these roles. Diversity is a good thing. Embrace it.

Bollywood has a lot of Talented Actors

Just look at the strength of the cast in this film. The collective resumes of people like Vidya Balan, Neeraj Kabi, Vijay Raaz, Ila Arun, Sharat Saxena can be stitched together to make an encyclopedia. With multiple volumes! Thanks to OTTs, not only does it provide a qualitative cast but also provides us with extraordinary scripts that couldn’t have ever been imagined.

So much more than just Man-Animal Conflict

While the story may seem about an endangered animal facing angry humans. We can’t help drawing parallels with how a lot of women are treated in hostile spaces. When faced with hostility, often a woman might react in a certain way, which might get her the tag “difficult” or sometimes way worse names. Vidya Balan well justified the attitude of her character and guess what? It’s a story written by a woman – Aastha Tiku. We want more of such kind of scripts and performances.

“Each of us is a Sherni, but it feels wonderful to be called one!”