One of the most loved and celebrated couples in the glamor world is Virat Kohli-Anushka Sharma. Ever since their secret escapade to Italy to get married, the couple has been giving some serious love and couple goals to everyone. Their PDA is quite evident on social media and their fans do not leave any opportunity to catch their lovely moments.

Anushka Sharma has taken a break from an otherwise hectic life and looks like she is now vacationing abroad! While currently on tour with her hubby Virat Kohli, the actress seems to be having the time of her life and is exploring various places on the way! In the latest picture shared by Anushka, the Bollywood star can be seen on a beach absolutely slaying it in an orange and white bikini. With her hair pulled back into a bun, Anushka looks charming as always as she flashes a gorgeous smile. Anushka Sharma looks immensely happy and is literally glowing in the picture. She captioned it as, “Sun kissed & blessed 🧡⛱️” A lot of comments poured in for the picture and her fans showered the actress with compliments. Virat Kohli too was awestruck and couldn’t hold back from commenting.  He dropped a heart along with a heart- eyed emoji ! Take a look at the picture and the adorable comment below: 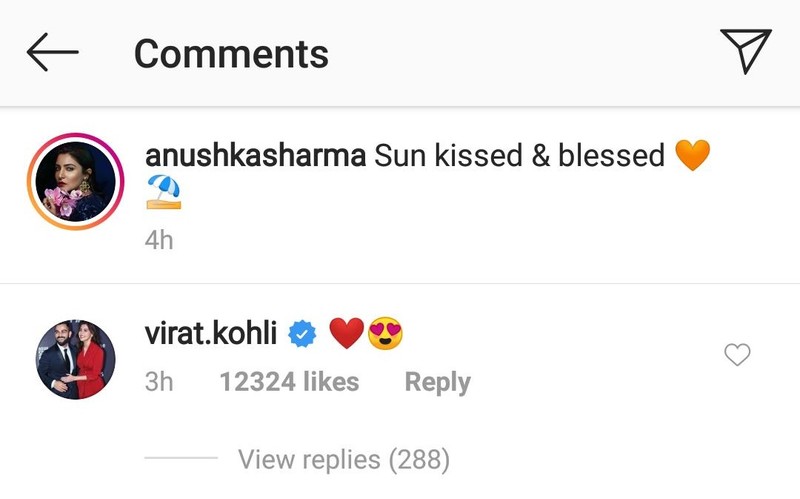 Meanwhile, on the work front, Anushka Sharma was last seen in Aanand L Rai’s film Zero along with Shah Rukh Khan and Katrina Kaif. While the actress is not very keen on announcing her next movie soon, we are excited for sure to find out what her next Bollywood film will be!