The daughter of Aamir Khan, Ira Khan, and her partner, Nupur Shikhare, got engaged after dating for a while. The two were a picture of beauty as they walked side by side. Even better, they posed for the cameras waiting outside the venue. The whole family was seen at their engagement ceremony on Friday night. Aamir and his family and many of their close acquaintances were there.

The proposal to Ira Khan by Nupur Shikhare

It’s interesting to note that Nupur Shikhare got down on one knee to his girlfriend while participating in the prestigious Iron Man Italy competition. In a video he uploaded, Ira Khan, can be seen as the fitness teacher approaching his fiancée while sporting a race driver’s outfit.

He then dropped down on one knee and proposed to Ira with a ring, and both replied, “Yes.” Ira Khan was overjoyed by the perfect proposal and took a picture of the golden occasion to share on Instagram with the caption: 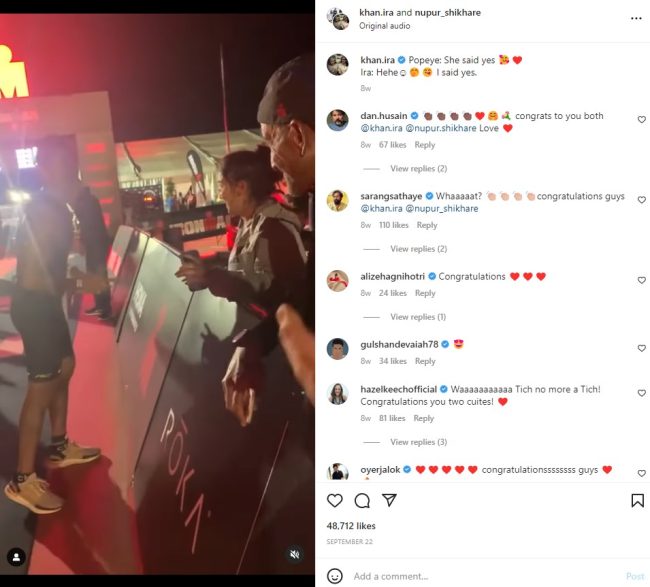 Take a look at the video here

Although there have been speculations about Ira Khan and Nupur Shikhare getting married for some time, the couple has not yet released any information regarding their planning. The pair did, however, celebrate their engagement today. Ira Khan, the actor Aamir Khan’s daughter, looked lovely in a deep-red, off-the-shoulder gown. She kept her looks simple with a black chain around her neck and a simple dangling earring and pulled her hair back into a ponytail. The smile on her face suggested that she was happy. Her attire coordinated beautifully with that of Nupur Shikhare. He looked dapper in a black tuxedo, white shirt, and a black bow.

Since he was last shown in Laal Singh Chaddha, Aamir Khan has transformed in looks. He was seen by the media standing beside Zeenat Hussain, his mother. He was seen attending the major event dressed in a dhoti and a white patterned kurta.

His nephew Imran Khan also participated in the function. As seen, he came over with his daughter. After giving up performing, he was seen making a rare appearance at the family get-together. He seemed slick wearing a blue blazer. Aamir’s ex-wives, Kiran Rao and Reena Dutta were also present. Azad’s mother, Kiran, was spotted with him. Kiran and Nupur also shot photos outside the ceremony.