After Separation News Of Aamir And Kiran, A Lookback At His Love Story With Ex-Wife Reena Dutta

One of the Bollywood’s most incredible and loved couple Aamir Khan and Kiran Rao have announced their divorce after 15 years of togetherness. On the 3rd of July i.e. Today, B-town’s top-notch couple came up with a joint statement announcing their decision to part ways. Kiran is Aamir’s second wife. Before Kiran Aamir Khan was married to Reena Dutta for 16 years. Aamir Khan and Reena Dutta’s separation happened in a dignified way in 2002 and didn’t see any sort of ugliness. Reena Dutta and Aamir Khan have two children together, one is son Junaid Khan and the second is daughter Ira Khan. Let’s have a look at the actor’s story with Reena Dutta.

Aamir Khan and Reena Dutta’s love story is no less than a romantic and melodramatic Bollywood film. Their relation started in a quite romantic way. They both were neighbors and were used to look at each other from their windows for hours. One fine day, Aamir gathered the courage to confess his love to Reena but Reena denied his proposal as she was not sure about it. Later, Aamir, many times tried wooing her but it was not easy to impress and convince Reena. When Aamir was hell discouraged, Reena came up to him to express her feelings. Aamir’s constant trials made Reena fall for him. “I spent a little more time than natural in front of my window. I just told her that I loved her and I hoped that she felt the same about me,” Aamir said in an interview back in 1999. 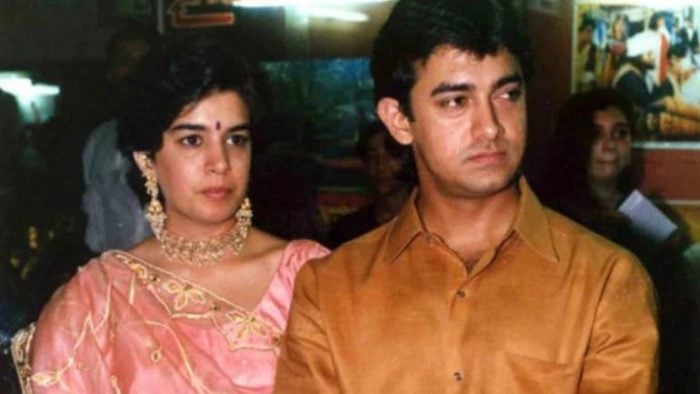 Aamir further said, “And as it happened she said that she didn’t so I was devastated that this can’t be happening to me again. I’m not the kind of guy who gives up easily. I didn’t take no for an answer. After two days she met me and she said I still feel the same. I really avoided the window. I was heartbroken and I was trying to stay away from her and get over her.”

Aamir did all the possible things to impress Reena more. According to sources, when Aamir and Reena were in a relationship, Aamir had written a letter to Reena with his blood. As it is not a great way to express feelings, Reena didn’t appreciate that behavior even a bit and asked him to never repeat such harmful things. Later, Aamir also had realized that he shouldn’t have done that.

Lagaan has completed 20 years on June 15, this year, and Aamir in a conference shared some unknown facts about the legendary movie that was released in 2001. On being asked what is the one particular thing that has stayed with him all these years, the actor expressed how Reena Dutta helped him to make his dream come true. Reena’s debut in Bollywood was with Aamir Khan’s Qayamat Se Qayamat Tak. Reena had taken a huge step by producing Lagaan. Lagaan was Reena’s first time in the production field.

Aamir said in the conference that, “I think the one thing that remains with me is the way Reena handled the film. My ex-wife Reena, who was a producer of the film, was somebody who had no understanding of cinema until then. Though she was married to me for several years, she was not interested in films. So she never knew anything about filming. So, when I requested her one night that main produce kar raha hoon (film), I will need your help. So, she said I don’t know anything about filmmaking, what can I help you with?”

After having a blissful marriage of 15 years, the couple got divorced in 2002. Aamir and Reena don’t have anything negative for each other. In fact, they share a good friendship bond. They even work together even after the divorce on the Paani Foundation, of which Reena is the COO. Aamir in an interview praised Reena and said, “She is a wonderful person as well. Sometimes a relationship doesn’t work but I have a lot of love and respect for her. In fact, we are working together on this Paani project. She is the COO of the company.”

Aamir also mentioned how he shares a cordial relationship with ex-wife Reena on Koffee with Karan season 6. He said, “Reena and I were married for 16 long years. When we split up, it was traumatic for us and our families. We tried to deal with the situation as best as we could. Reena and I did not lose love or respect for each other post our split.”

Well, Aamir and Kiran are also taking the same route. They have stated that they will remain cordial to each other and will also Co-parent their son Azad Khan.