Air India Plane Gets Stuck Underneath Over Bridge Near Delhi Airport: Find Out What Happened?

Have you ever heard of airplanes roaming around on roads? Or have you seen airplanes flying in the sky just above your head?  Or have you ever seen an airplane got stuck underneath a foot over bridge? Well, today I am going to share one such story with you guys. On Sunday morning a video went viral on social media in which an Air India plane got stuck underneath a foot overbridge on the Delhi-Gurugram highway outside the Delhi airport, leaving people in shock as to how the plane got there. 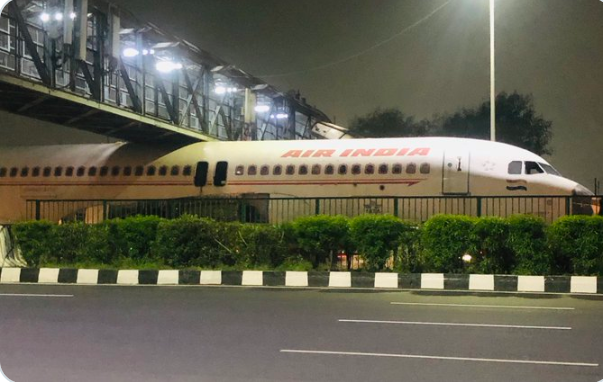 However, since it became a viral topic the airline confirmed there was no mishap involved, with the plane being an old, scrapped aircraft which has been sold by Air India and was being transported by the plane’s owner.

Air India spokesperson said, “This is an old, scrapped aircraft which has already been sold off by us. There is no additional information as it involves the person to whom it has been sold off”.

In the video shared on social media, vehicles can be seen passing through one side of the highway while the other side appears to be blocked by the aircraft. The nose of the aircraft and half of its body has also crossed underneath the foot overbridge before the top half gets stuck.

A Delhi airport official also confirmed that no flight or active aircraft had been involved in an incident. He said, “The aircraft certainly does not belong to the Delhi airport’s fleet and in the video, it is being transported without any wings. It appears to be a scrapped plane and the driver may have made a judgement of error while transporting it”.