Bollywood actress Alia Bhatt has finally become actor Ranbir Kapoor’s bride. On April 14, both of them got married in the presence of family and special friends. The couple got married at Vastu, the house of the Kapoor family in Bandra.

Since this marriage, everyone was eager to see Ranbir and Alia in the bride and groom’s getup. This was the reason that as soon as the pictures of Ranbir-Alia’s wedding surfaced on social media, they became increasingly viral. While many people are lavishing their love on these pictures of Ranbelia, some questioned the look of the actress on this occasion. 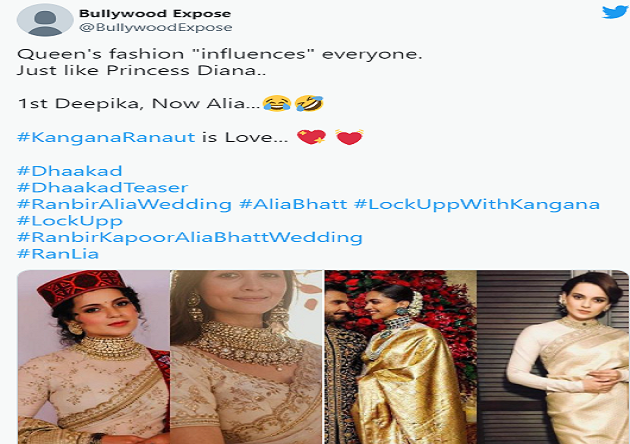 Seeing the pictures of Ranbir-Alia’s wedding, some people told Alia’s dress was a copy of Kangana Ranaut’s saree. A picture is becoming increasingly viral on the Internet. In this photo, new bride Alia Bhatt is seen on one side, while on the other side Bollywood’s famous actress Kangana Ranaut is seen.

The special thing is that in these pictures of both the actresses, their getup looks very similar to each other. In this picture that surfaced, Kangana is seen in the reception look of her brother Akshit Ranaut. But the surprising thing is that this look of Kangana was exactly matching the wedding look of Alia Bhatt, who recently became a bride.

In such a situation, now many social media users are calling Kangana Ranaut a fashion icon, while some are also saying that Alia has copied Kangana. Apart from being the same saree of both the actresses, its designer is also the same.

These sarees of Kangana and Alia were made by famous designer Sabyasachi. But Sabyasachi seems to have made a mistake while designing Alia’s dress. Now it is difficult to say whether Alia has copied Kangana’s look or not.

But Alia, who recently became a bride, was looking very beautiful in her wedding look. Unlike the classic red look, the ivory look of the actress was giving her a different look from the rest. Matching this look of Alia, Ranbir Kapoor also wore an ivory-colored sherwani, in which both looked quite royal.