Bollywood’s dimple girl Deepika Padukone is currently in the news for her next film ‘Gehraiyaan’ with Siddhant Chaturvedi. The trailer of this film has just been released and the chemistry between Deepika and Siddhant in this trailer is being liked by the audience. In this, many bold scenes have also been filmed between these two and now Deepika’s husband Ranveer Singh has released his opinion on social media. 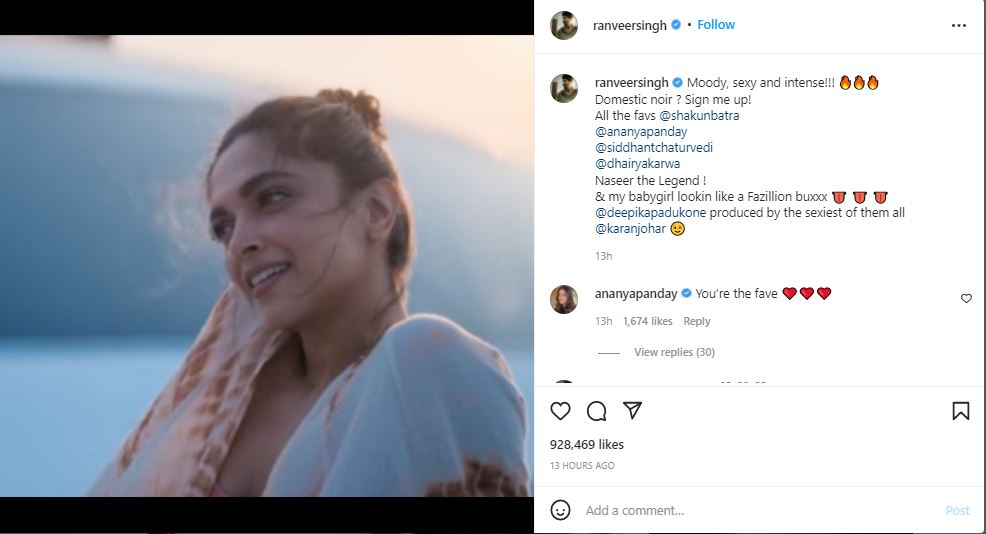 The movie is all set to release on the OTT platform. Not only the audience but the stars have also given their feedback on its trailer, calling it great. Now Deepika’s husband Ranveer Singh has also given his opinion on this. Sharing a poster of the film on his Instagram account, Ranveer wrote, “Moody, sexy and intense, domestic noir? Sign me too. You all are my favorites Shakun Batra, Ananya Pandey, Siddhant Chaturvedi, Dhairya Karwa, Naseer the Legend.” Tagging Deepika in his post, Ranveer wrote, “My baby girl you look like a fazillion buxxx.” Ananya Panday has also commented on this post.

Karan Johar himself said at the trailer launch that the film ‘Gehreiyaan’ is a story of love, longing and yearning. The trailer of the film also shows that Siddhant Chaturvedi and Deepika Padukone’s characters leave their teammates and come closer and ask, ‘Are we just messed up people?’ and then get lost in each other’s arms. This is a new-age love story. A story in which infidelity also has its reasons. Directed by Shakun Batra, this film will be released on February 11, 2022, on Amazon Prime Video. Naseeruddin Shah and Rajat Kapoor have also played important roles in this film.