The recent spotting of Bollywood celebrities at an award show in Mumbai became a talking point in the media. From Kartik Aaryan bumping into ex-girlfriend Sara Ali Khan to him refraining to shake a leg on Dharma films’ song on stage, every event from the evening grabbed eyeballs.

Now, as per the videos circulating online, fans have identified how Kartik Aaryan landed on stage to dance to Karan Johar’s movie song Nach Punjaban. As per the video, it was Varun Dhawan who persuaded Kartik to move his body on stage at the actor’s insistence. Here’s what happened.

The Bhool Bhulaiya 2 actor was sitting in the audience while Ranveer Singh, Arjun Kapoor, Ayushmann Khurrana, Anil Kapoor, Kriti Sanon, and Sidharth Malhotra had Varun and Kiara on the stage. When Varun saw this, he held Kartik’s hand and made him come on stage, saying, “Kartik, come, you can dance to a Dharma film song.”

After Kartik came on Varun’s insistence, Varun and Kiara also called Karan Johar. Kartik, who shares cold vibes with the filmmaker could be seen smiling as Karan walked up to the stage. When Nach Punjaban played, everyone did the hook step except for Kartik. 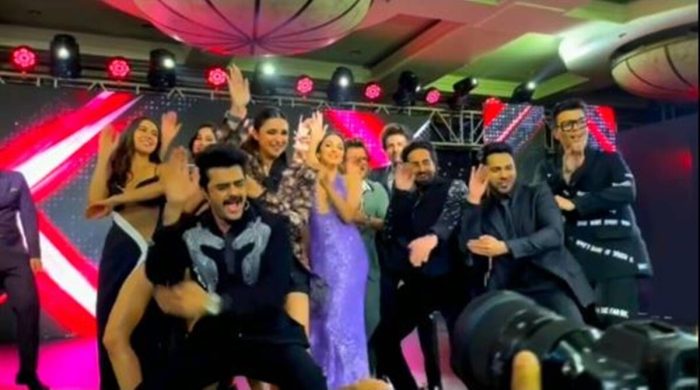 Though this act of Kartik was noticed by one and all, Varun missed it. When Varun shared a video of all industry colleagues dancing to his number, he called out actor Arjun Kapoor for not doing the step instead of Kartik. Arjun was quick to respond to it. “Varun Dhawan jab humne kiya toh aapki team ne record nahi kiya kyunki aap Kartik Aaryan ke Bhool Bhulaiyaa mein kho gaye (Varun when I did the steps, your team didn’t record it because they were busy recording Kartik Aaryan and were lost in his Bhool Bhulaiyaa),” he wrote in his Instagram stories.

For the unknown, Kartik Aaryan and Karan Johar had a fallout when the former backed off from Karan’s much-anticipated movie Dostana 2. Kartik’s latest outing Bhool Bhulaiyaa 2 is ruling the box office right now. As for Varun, the actor is gearing up for the release of his next titled JugJugg Jeeyo.