“I Have Always Looked Up To Rajinikanth Sir,” Says, Manoj Bajpayee- Readout!

The actor Manoj Bajpayee, on October 25, received the National Film Award for Best Actor for his performance in Bhonsle (2018). During the 67th National Film Awards, Actor Rajinikanth was conferred with the 51st Dadasaheb Phalke Award, while Dhanush bagged the Best Actor award, and his film Asuran won the National Film Award for the best Tamil feature film. Today, the Family Man actor took to his Instagram handle and dropped pictures with Rajinikanth and Dhanush. Sharing it he wrote, “Some moments with the greats during the national film awards ceremony !!” 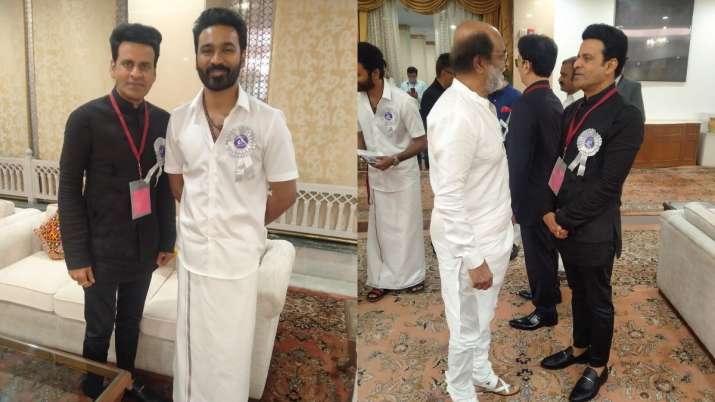 After winning two National Awards for Satya (1998) and Pinjar (2003), Manoj Bajpayee received a third on Monday as he was honored with the Best Actor award for his performance in Bhonsle (2018). He reveals that each time he goes up on the stage to accept his award, memories of his first win come rushing back to his mind. And while winning the top award is always special, this honor is slightly more special for the actor.

The actor Manoj Bajpayee says, “It feels even better when you win awards for films that are close to your heart. This was a film we wanted to make for a while but we weren’t getting money from anyone who could produce it. It took us four years to make Bhonsle. So, it means the world to us. It’s kind of a poetic justice that has happened to the film.”

The ceremony held in Vigyan Bhawan, New Delhi, will remain a fond memory for the 52-year-old actor as it also allowed him to interact and exchange notes with other artists. Interview him about meeting superstar Rajinikanth, who was bestowed the Dadasaheb Phalke Award, and Bajpayee says, “Rajinikanth sir is a legend and I’ve always looked up to him for the journey he has had. He came from a humble background and created such a big name for himself. He treats everyone with a lot of humility. I spoke to him but it had nothing to do with cinema but spirituality.”

Speaking about his interaction with South star Dhanush, who also won the Best Actor award, he says, “I had a long conversation with Dhanush. We shared our thoughts on the films we like and the films that I’ve watched. He’s a remarkable young mind doing some remarkable films. He’s very inspiring.”