Kerala Accounts For 30% of India’s Daily Covid Tally; Know Why

India’s daily Covid tally is coming down to a phenomenal decrease. But one state is struggling with it and it is none other than Kerala. The second wave of Covid is still taking a toll on the population of Kerala. As per the recent data, Kerala accounts for 31.7 percent of the country’s total fresh cases and 15.6 percent of daily deaths in the country.

On January 27 last year, when Covid was about to knock on our doors, Kerala reported its first case of the deadly virus and by doing so, it became the first state to register a Covid case. The state had no active case by the end of next month.

Less than two weeks later when Covid-19 was declared a pandemic and it was beginning to sweep Entire India, Kerala was no exception in recording a number of infections of Covid. But soon the state got applauded globally for its effective control of the disease. The World Health Organisation (WHO) hailed the success of Kerala in fighting the virus. Payden, the WHO’s acting representative to India, in July 2020 said, “This (Kerala) template could serve as a great example for other states to emulate.”

The health ministry of the state is calling the situation a ‘controlled explosion.’ Dr. Amar Fettel, Kerala’s nodal officer for communicable diseases said, “It is always better to have a mid or smaller peak that extends over a large period of time rather than having huge peaks for shorter periods. More time provides an opportunity for the health infrastructure to step in and provide essential support.” 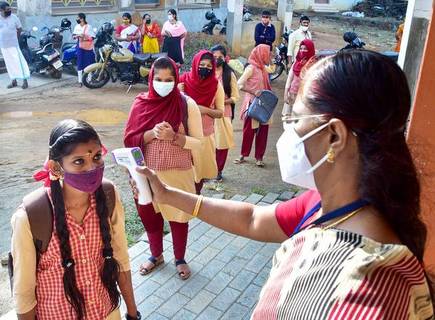 But seems like the second wave of Covid is refusing to die down. If we see the condition of the state in July 2021, we can clearly see that despite a fall in Covid cases in the entire country, Kerala is still waiting to get relief from the pandemic.

The average of reported cases in the state on a weekly basis reached above 10,000 on April 18, and since then, it never fell below the 10,000-mark.

The death rate also seems to have increased in the state. The weekly average deaths in Kerala climbed from 21 to 127 since April 18, while it fell from 1,226 to 803 at the national level during the same time.

The sharp rise came after a month from the time when the state appeared to have successfully managed to bring down the daily-case tally again. It stood at about 1,054 mid-March this year with a test positivity rate (TPR) of 2.54 percent. But on May 12, Kerala registered a TPR of 29.75 percent. And on July 8, the state’s average seven-day TPR was 10.41 percent.

If we look at the national level, the weekly average test positivity rate has come down to 2.32 percent on July 8, from a peak of 22.77 percent on May 9.

Dr. Sulphi Nooh, a central working committee member of the Indian Medical Association explained how dense population and high mobility in the state is one of the major reasons for a high number of infections there. He said, “Kerala’s huge population density and high mobility of the public are also an important reason for the cases remaining high. Kerala is like a huge town from end-to-end and people interact with each other very often. The large percentage of susceptible population is also an important factor”

Dr. Rajeev Jayadevan, a member of the state task force on Covid-19, said, “TPRs need not always be a direct indication about the spread of the virus. Medical infrastructure, and the strain on it, is a better marker.”

He further explained, “Targeted testing and easy access to the testing facilities as available in Kerala can be a reason for a high TPR in Kerala. Another important factor to assess the impact of the pandemic is with reference to medical infrastructure. During the peak and now there hasn’t been any shortage of beds in the ICUs for Covid and non-Covid cases, which indicates that the situation is under control.” 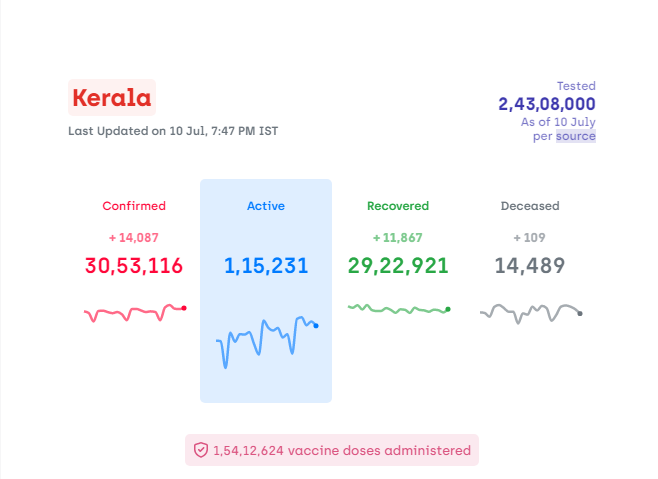 But even after a rise in the number of cases, the state is keeping a good pace with vaccination. As of July 8, Kerala inoculated 11,179,953 people with at least one dose of the vaccine. This accounts for 31.50 percent of the state’s total population.