To mark the death anniversary of Sushant Singh Rajput, many actors and his colleagues from the industry turned up to social media with moving posts. Sushant’s ex-girlfriend Ankita Lokhande who had a 6-year long relationship with Sushant shared some never-seen-before pictures with the actor from the times when they were dating. Later, Rhea Chakraborty also shared an emotional, lengthy note for her ‘whole heart Sushant with a happy picture of them.

Joining the bandwagon now is Bollywood beauty and Sushant’s alleged ex-girlfriend Kriti Sanon. Kriti and Sushant shared screen space for the first and last time in Dinesh Vijan’s movie titled Raabta. In memory of Sushant, Kriti has posted a collage of pictures that features her and Sushant in different frames. According to Kriti, the pictures are from their look test for the movie, Raabta.

Taking to Instagram, Kriti wrote, “The first time I ever shot with you. Our look test. 2 complete strangers, meant to cross each other’s path, for a film that spoke of unexplainable connection, Based in two worlds.”

Her note further reads, “Today, it feels so painfully weird to know That You and I are not in the same world anymore. Still feels like it hasn’t happened for real. Like maybe you are still around and I’ll bump into you somewhere. I don’t think it’ll EVER sink in. But I pray that you are happy and at peace in whichever world you are in. #sush.” Kriti also thanked Anaita Shroff Adajania (designer and wife of Homi Adajania) for sharing a collage with her. She said that the pictures have brought back a lot of memories. 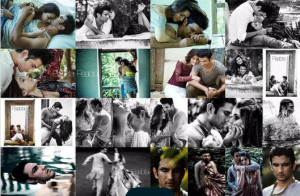 Earlier this month, Kriti and Sushant’s film Raabta completed 4 years, and to celebrate the same, Kriti shared a video of several behind-the-scenes moments of her and Sushant. Along with the video, Kriti wrote, “I believe in connection, I believe that we are meant to meet the people we do. My Raabta with Sushant, Dinoo, and MaddockFilms was just meant to be.” She added, “Raabta was one of my best and most memorable experiences and it will ALWAYS remain extremely close to my heart. Little did I know that it would be our first and last.”

Sushant left for his heavenly abode on June 14, 2020. The actor was found dead in his Bandra apartment in Mumbai. His last theatrical release was Chhichore which was praised by critics. His last movie Dil Bechara got an OTT released after his death.