Love at Traffic Lights Under a shower of rain.

A jeep honked mercilessly from behind her, she popped her head out of the window and glared at the driver. The honking stopped immediately.

She was late. Again! Sigh! When on earth would she be able to leave her office on time ever?

She glanced at her watch,”Man! It’s already 8!” She stared at the traffic ahead and sighed again. Delhi traffic was always ruthless; she had been stuck for precisely 21 minutes. Seemed like everyone in Delhi wanted to merge around GK-1.

Maybe she shouldn’t have taken the decision to stop at the mall to pick up groceries and stuff for dinner. But she had to – the pasta was over and she had to get it, it was his favorite and hers too.

A jeep honked mercilessly from behind her, she popped her head out of the window and glared at the driver. The honking stopped immediately. She glared some more and the driver almost wished invisibility.

Men! She swore through clenched teeth as she pulled her head inside.

And then, she smiled. Everything seemed exactly the same, just the way it was 10 months, two weeks and three days ago!

Honk honk! She was pulled out of her reverie. The traffic was moving at a snail’s pace. She pulled over slowly to the turning. Here, it halted again. She let out a deep sigh.

She had promised him that she would be home soon – at least tonight. It had been ages since they had talked about their dream project or had had dinner together.

It was on a hot, dusty evening like this that they had met. The traffic had been surging and it was already eight, people had been crawling to take diversions. It was during one such attempt that a bike had zoomed in towards her right and finding no space had pushed on the horn 10 times. She had a tiring day at office and this was the last straw, she had turned back, glared at the rider and almost screamed her lungs out.

And then…she had seen him, he had his helmet on and she could barely make out his face but she could see his eyes and that had did her in. She had felt a strange kismet connect when she had stared into those dark black eyes.

And it rained! The minute they had stared looking into each other’s eyes, huge raindrops pelted down from above. The fresh smell of earth seemed to seal their unintentional joy. There was something and yet there was nothing.

The rain had created a flutter and the vehicles had started rushing, she had got a little space and she had sped up the path and so had he. The spell had been broken and they had moved on. Unwilling …deep inside their hearts but they didn’t know it yet.

That night, she had mentioned him in her diary having no idea that he was describing her in his blog post the very same moment.

Two days later, she had a glimpse of him again at the traffic signal but before she could even react, he had sped past her as the lights had turned green.

Yet as she always believed, cosmic connections happened and sometimes they happened in such strange yet beautiful situations that they would put even the biggest atheists to doubt their theories.

Exactly a month later she had been invited to a conference on documentary film making and she had lingered on even after the crowd had dwindled. As she was returning, her tyres had betrayed her right in the midst of the lonely road. The roads were deserted and she had no spare tyre. The traffic light was red.

A bike stopped by her side and as she swept back her hair and looked with teary eyes at the rider, she was struck! Those eyes – weren’t the same, ones that had swept her away that evening?

Yes they were, he took off his helmet, got down and looked at her with a warm smile. Her heart skipped a beat, how his eyes crinkled when he smiled. Yet, she didn’t have time to fall into his arms and sing a song on this moonlit night. He had already bent down and checked the tyre. He was asking her something. What was it? She hadn’t heard!

“Can I drop you home?’ That’s what he had been repeating.

She looked at his bike and stared questioningly at him.

“Oh, don’t worry. We can ask the garage men to come and change the tyre and deliver the car at your place’, he said.

“Well okay, then I guess you can drop me home,” she had retorted.

He had burst into laughter when she had asked him all of these aloud. He had almost fallen down on the road. He had expressed the expression ‘rolling on the floor laughing’ aptly!

He had stopped after a long four minutes to introduce himself to her and also tell her how he had been a speaker at the conference and she hadn’t been able to listen to him because she had been busy screening her own piece at the other theater hall.

She had no apprehensions about accepting his identity. They had called the garage and then she had hopped on his bike and then…it had rained!

He had offered to ride after it stopped but she had asked him to go on…which he was more than happy to do.

It was the loveliest ride she had ever had and she was a dream pillion, speaking one to the dozen times, laughing loudly and holding on tight when the speed breakers came.

He stopped right in front of her colony and she had jumped down onto her feet and turned back to thank him. They looked into each other’s eyes and …yes… it rained again…

The following days saw them meeting a number of times at the red light signal and sharing ear to ear smiles. They used to talk to each other for a minute and speed over to their destinations. Slowly, numbers were exchanged, calls were connected and a date was fixed.

The traffic ruined their first date and they had spent the evening talking to each other stuck in the traffic and that whole night it rained. The dates followed and they knew that they were just the ones for each other. Like twin souls, one made to complete the other.

He was into research and they both being from the same field had abundance of material to share.

And then, one day, they had fought so hard that the whole restaurant had stared on. They had screamed at each other and she had thrown the milkshake on his face. She had left in a huff and he swore never to call her back.

He had to leave town for a project and she had to go on for a shoot. They didn’t meet for two whole weeks. The longest days of their lives.

The day she arrived, she had rushed from the airport to his place and he had ridden the bike from the site straight to her place.

The traffic was getting on her nerves, she heard someone honking for her to move and she almost screamed till her ears burst and as she turned, she gasped for a second and stared at the face…no, not the face…the eyes…!

The signal was red.

She hopped out of the car and hugged him tight and then…it rained! Like it had never before.

It had been seven months now.

The signal turned green, she sped towards her place.

As she entered the porch, she could see the lights in the kitchen.

As she entered, she could smell the yummmm pasta. Wow!

She entered the kitchen and there he was, he turned around and she saw those eyes. Was there anything else she had ever wished more than coming back to these arms and drowning into these eyes for eternity?

She kissed him…and then…

Nah! it didn’t rain. Global warming has been taking its toll, you see! 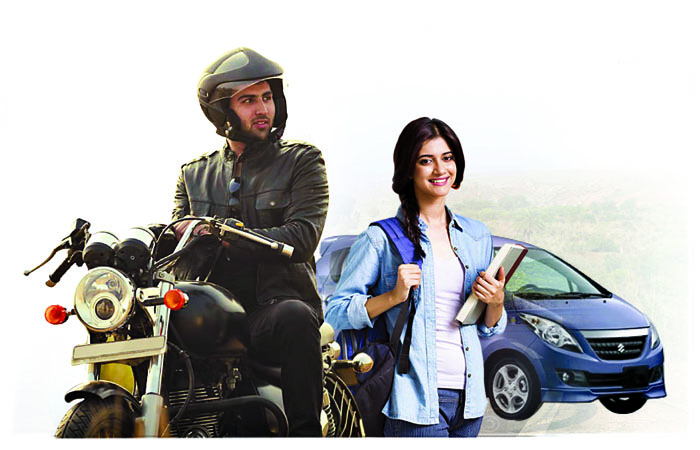 “Can I drop you home?’  We can ask the garage men to come and change the tyre and deliver the car at your place’, he said. “Well okay, then I guess you can drop me home,” she had retorted.