Priyanka Chopra and Nick Jonas have given us couple goals numerous times. The adorable duo stunned everyone when they confirmed dating each other. Later, their wedding became a topic of discussion for the entire nation.

Recently, the couple celebrated three years of their blissful married life in London. Both Priyanka and Nick decided to keep it simple. They arranged a romantic candlelight dinner to mark their third wedding anniversary.

Sharing a glimpse of their dinner date, Nick took to Instagram to post a video. In the clip, Nick showed a beaming Priyanka sitting at a table with candles and flowers on it. Larger candles and rose petals were seen spread on the floor. The word ‘forever’ was lit up behind Priyanka. In the caption, Nick wrote, “3 years,” along with a heart emoji. 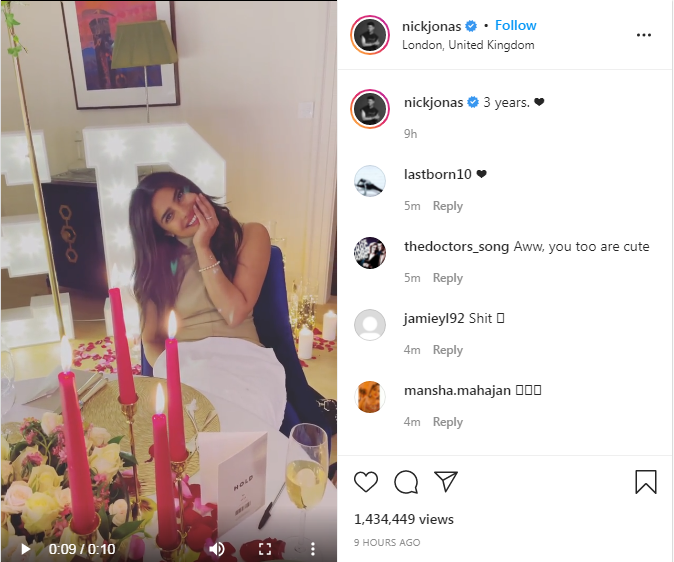 Priyanka also shared a picture from her celebrations. She posted a photo of the table set-up with red candles, flowers, and a card saying, “Found you, married you, keeping you.” In the background, a white feathery wall with a neon sign saying ‘always and forever’ can be spotted. “Living the dream @nickjonas,” she penned in the caption and added a heart emoji. 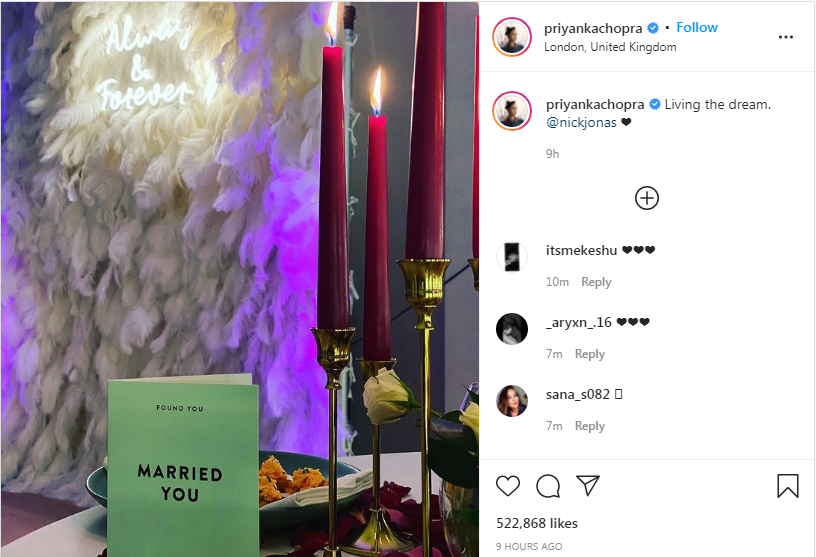 Priyanka and Nick got hitched in two ceremonies on December 1 and 2, 2018. They exchanged the wedding vows in a Christian wedding, officiated by Nick’s father Paul Kevin Jonas Sr, as well as a Hindu ceremony.

Since late last year, Priyanka has been living in the UK due to her back-to-back shoots, while Nick was in the US. Talking about how she and Nick made their long-distance marriage work, Priyanka on the InStyle’s Ladies First With Laura Brown podcast said, “Like I said, this year was hard for me being in London. He would just drop everything, come in for even like, a day, just have dinner with me, and then fly back. Stuff like that, you just have to prioritize each other and then everything feels right.”