Actress Richa Chadha is one of the most sought-after actresses of Bollywood. The Fukrey actress is phenomenally talented. She is known for her outspoken personality. Richa is often seen taking a stand and putting her point of view on the happenings around the world, be it political, sports or films. The actress recently narrated the reality of the “imaginary” Bollywood.

The Madam Chief Minister actress on Tuesday took to her Instagram Story to post a note. In her write-up, Richa talked about how in the film industry, struggling actors are fooled into doing things that are ‘detrimental’ for them. Though she did not take any names, Richa elaborated on her experience when she was naive and people would take advantage of that.

In her note, Richa penned down, “‘Bollywood’, an imaginary address between Bandra and Goregaon. Here when people need you to do something detrimental to you/your health/your career, they’ll tell you how good it is for you and be confident that you’ll believe them. I used to believe them when I was naive.” 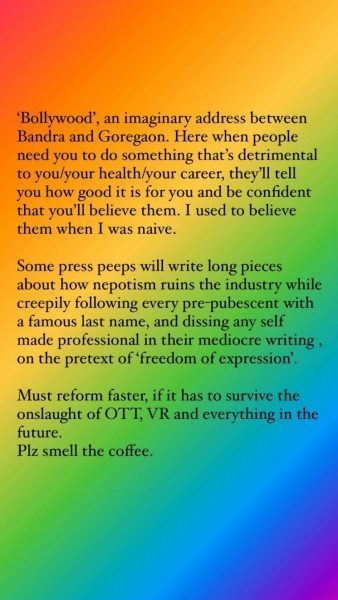 Richa also lashed out at the media for being hypocrites in their approach towards nepotism in the industry.

Further in her write-up, Richa added, “Some press peeps will write long pieces about how nepotism ruins the industry while creepily following every pre-pubescent with a famous last name, and dissing any self-made professional in their mediocre writing, on the pretext of ‘freedom of expression’.” 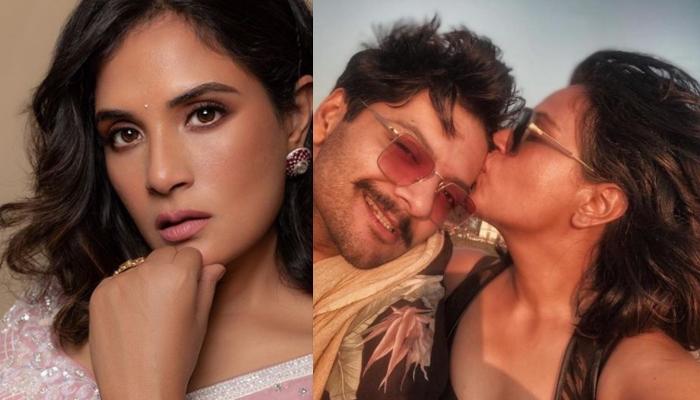 Richa is dating actor her Fukrey co-actor Ali Fazal. The couple announced the launch of their production house Pushing Buttons Studios in March this year. The first film under their production house, Girls Will Be Girls, will be directed by Suchi Talati. The movie will be set in an elite boarding school in a small Himalayan hill town in Northern India. It will capture the story of a 16-year-old girl, whose is rebellious but is hijacked by her mother. Besides Ali and Richa, Crawling Angel’s Sanjay Gulati and Pooja Chauhan and Dolce Vita’s Claire Chassagne will also produce the film.

Richa and Ali will once again unite on screen in Fukrey 3.