Check Out What Salman Khan Advised For His Fans!

Salman Khan’s much awaited movie Antim released yesterday, with much fanfare, among all the cinema halls. The movie had a blockbuster opening, with fans pouring in to watch the superstar on big screen. Earlier, while the fans were overjoyed to watch their icon in a new avatar, Salman had advised the fans, to not burst crackers in the cinema halls. He also asked the authorities to not allow any firecrackers to be allowed into the theatres. The video of the fans bursting crackers, to celebrate watching their larger than life hero on the silver screen after the pandemic chaos, was shared by Salman Khan on his Instagram handle. He wrote, “Request all my fans not to take fire crackers inside the auditorium as it could prove to be a huge fire hazard thereby endangering their lives and also others.” He also added, “My request to theatre owners not to allow fire crackers to be taken inside the cinema and security must stop them from doing so at entry point. Enjoy the film by all means but please please avoid this is my request to all my fans..thank you🙏.” The video shared, of the fans bursting crackers, was from the movie’s screening. 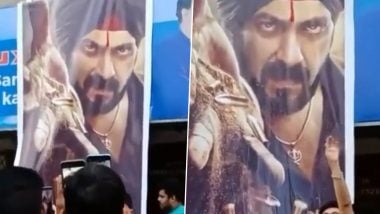 The movie starring Salman khan, Ayush Sharma and Mahima Makwana is directed by Mahesh Manjrekar. The movie had a blockbuster opening and has minted over 10 crores, during its second day in running. The plot revolves around a small town boy who dreams of becoming the biggest don, ever. Salman Khan plays the role of a serious cop, which is a complete opposite of his Dabbang franchise character. He plays a cop, of Sikh religious background, who watches the small towner getting closer to his dreams, but is unable to do anything due to political interferences. Salman Khan’s look as a Punjabi is being loved by his fans immensely.