Shamita Shetty Flirts With Raqesh Bapat Inside The BB House, Latter Replies In A Cute Way.

Shamita Shetty who is currently locked inside Salman Khan’s Bigg Boss house is missing her ex-co-contestant and rumored beau actor Raqesh Bapat. Shamita’s official account has shared a clip where she can be seen practicing Marathi Lines for Raqesh.

In the video, Jay Bhanushali, who is also a contestant on Bigg Boss this year is seen teaching Shamita some Marathi lines and asking her to enact them like a shy woman. He is also directing and encouraging Shamita to practice more.

The other contestants present there are spotted enjoying her performance and then telling her that if Raqesh will see her like this he will enter the show. A blushing Shamita is telling them that he won’t take entry in the show. 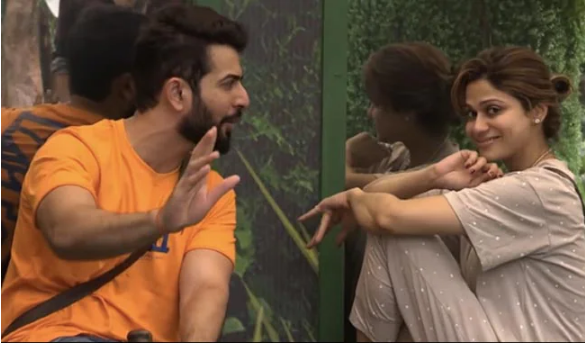 For the unversed, Raqesh is a foodie and loves pohe. Shamita’s co-contestant Tejasswi Prakash is seen teasing her by asking to make ‘pohe’ the next day. Jay was even heard calling Shamita ‘Shamita Shetty Bapat’. Now Raqesh has reacted to the same post on Shamita Shetty’s handle in the cutest way possible. Showing that he is missing his lady love, Raqesh has written in Marathi, “Hooo aaikla kanda pohe awaits.”

After Salman Khan introduced Bigg Boss OTT contestants Shamita Shetty, Nishant Bhat, and Pratik Sehajpal on Bigg Boss 15, Raqesh shared a video with Shamita on his social media handle to wish her luck on her journey. He wrote,  “It feels odd to be seeing you on screen and not have you next to me but I know you are going to do fab, you will shine, you will make us all proud! And I will be right there metaphorically next to you supporting you in this journey! You are inspiring, you are strong, you are unique and you are real and that shall shine out! @shamitashetty_official…” Raqesh also used the hashtag “Shara” in his post.

In the latest episode of BB15, co-contestant Karan Kundra age-shamed Shamita by calling her aunty. The same has garnered a lot of reactions from the audience. Shamita’s mother Sunanda Shetty has also slammed Karan for the same and has also asked host Salman Khan to address the issue on Weekend Ka Vaar. But Raqesh’s reaction to it is highly awaited.