Tejasswi And Karan Got Married In An Intimate Wedding!! See The Pictures Inside!!

Bigg Boss 15 fame Tejasswi Prakash and Karan Kundra are one of the most popular couples of the small screen. Their fans with love call them ‘Tejaran’. Meanwhile, nowadays the news of their marriage is becoming very fast. On social media, in these pictures, Tejasswi and Karan’s bride-groom’s getup is becoming a topic of discussion. 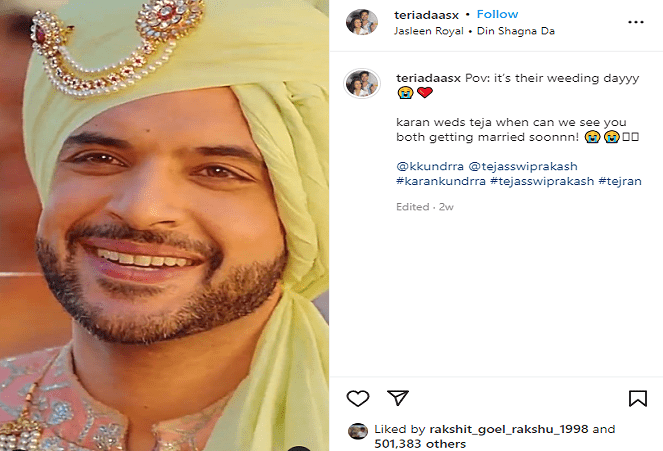 Ever since Tejasswi and Karan accepted their relationship in Big Boss house, people are eagerly waiting for their marriage. Fans want to see their favorite couple being united. And perhaps their wishes seem to be fulfilled, it seems the same by looking at these viral pictures.

Actually, a video is going viral on social media these days, in which Tejasswi Prakash is seen in the wedding outfit. Along with full bridal makeup, she has also carried a peach color dupatta. While Tejasswi looks beautiful, Karan Kundra is also seen in a sherwani of Peach color, as well as he has tied a green safa, both are looking very good in this video. 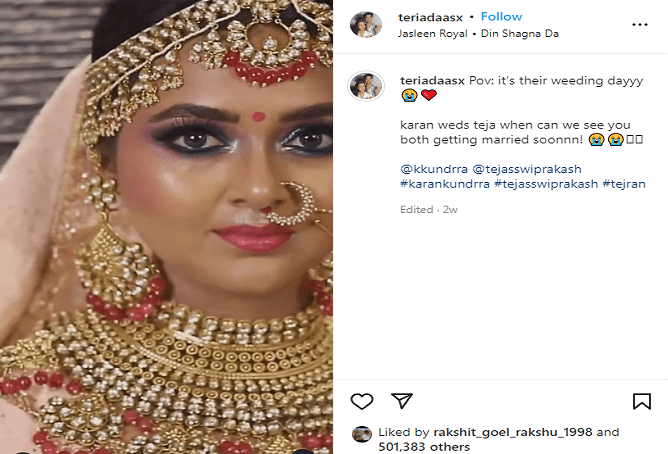 Seeing this video, Tejaran fans were over excited. Talking on the work front, Karan was recently seen as a jailer in the tyrannical game of Kangana Ranaut. Also, Karan is quite excited about his new album launch. Apart from this, there is no major project in his hand at the moment.

On the other hand, as soon as she became the winner of Bigg Boss 15, Tejasswi Prakash got an offer of ‘Naagin 6’. Tejasswi’s show ‘Naagin 6’ is making a big bang these days. People are very fond of the character of the system in the show. At the moment, Tejasswi and Karan also remain the favorite of Paparaji. Wherever they go, media cameras do not get tired of chasing them.