Vir Das Gets Applause From Priyanka Chopra For His Nomination In International Emmy Awards-Checkout!

Actor and comedian Vir Das is ruling the headlines since the release of his controversial poem on India. While some nationalists have got offended by his words, some others are praising him for being bluntly honest in his “I Come From Two Indias” monologue.

In recent times, Vir Das also got nominated for his comedy special, Vir Das: For India, on Netflix at the International Emmy Awards. It is the same show which brought criticism for Das back in his homeland.

Now, the comedian has received a shoutout from the very versatile Priyanka Chopra. Appreciating Vir for the nomination, Chopra praised him with some valuable words. 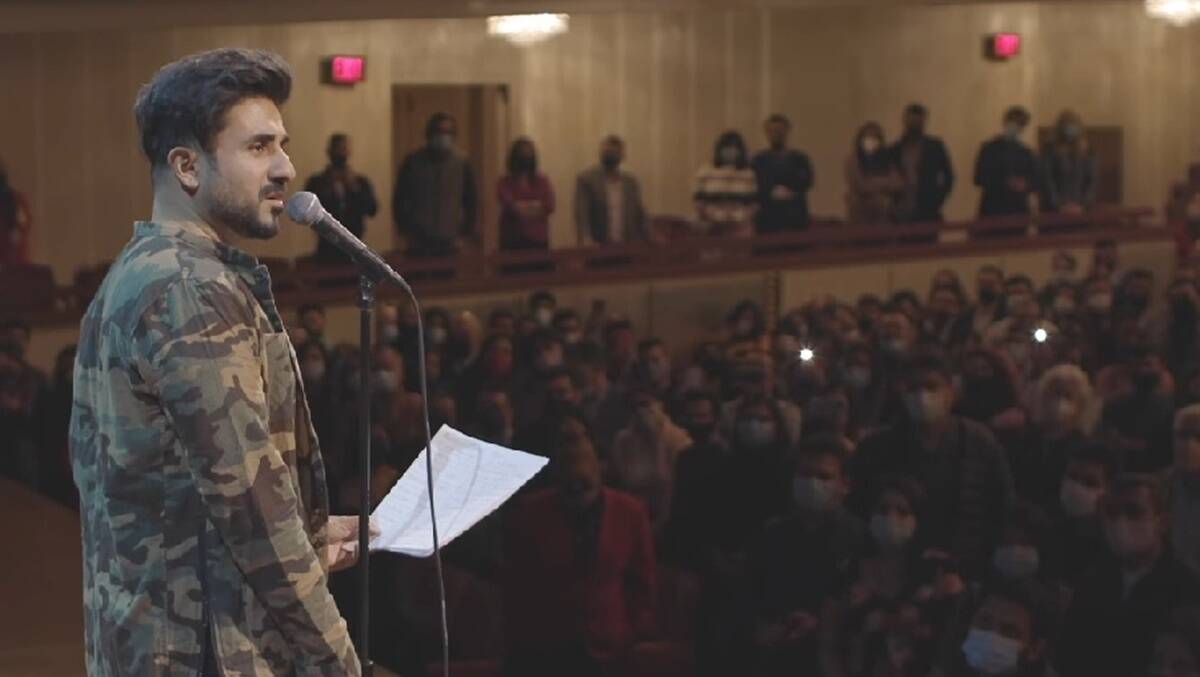 Priyanka took to her Instagram Stories to congratulate Vir. She shared a photo of the nominee medal won by Vir and penned, “Congratulations @virdas u make us so proud!” 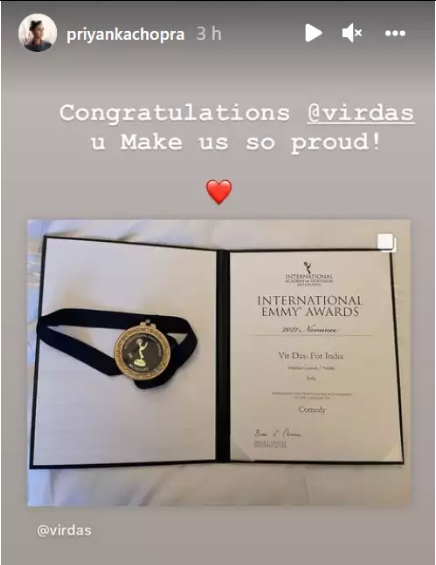 Vir Das had shared the news of him attending the International Emmy Awards on his Instagram handle. He shared pictures of his nominee medal and meal. In the caption, he wrote, “I was nominated for best comedy at the International Emmy Awards, for jokes. Call My Agent, a gigantic beautiful show I love won. But I got this medal and ate this fantastic salad with a very interesting crispy cheese topping. It was an honor to represent my country. Thanks so much to the @iemmys For India. It’s always for India. #VirDasForIndia.”

On the evening of Tuesday, Vir went on to share the story behind the outfit he donned for the red carpet at the International Emmy Awards. Sharing pictures of him wearing a jacket over kurta and pants, he wrote, “Did not want to go with a fancy foofoo designer for the Emmys. Put a post out saying if you’re struggling or studying, I would buy & wear your design. We found #PradeepBhatt @pradbhatt from Haldwani, Uttarakhand in his 4th year at NIFT Kangra. Proud to wear your first originals buddy. Hope this is the beginning of a wonderful future for you! This outfit will soon be auctioned for charity.” 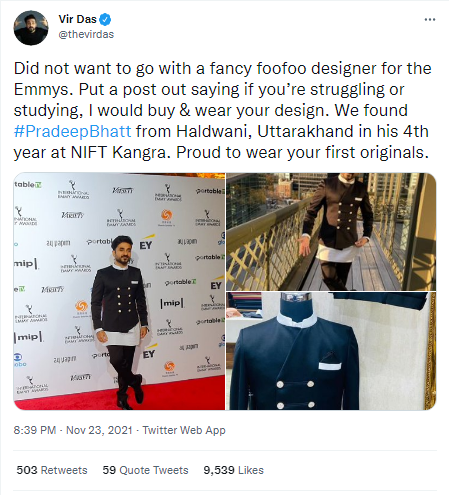 Vir’s Netflix comedy special failed to win the award. The show lost the race to Call My Agent Season 4 from France in the comedy category. The comedian appreciated the same and also expressed his love for the French drama.

Meanwhile, Nawazuddin Siddiqui was also nominated for his Netflix movie Serious Men. He lost out to Scottish actor David Tennant in the best performance by an actor category. Besides that, Sushmita Sen’s web show Aarya was nominated in the best drama series category. It lost the award to Israel’s Tehran.