Actress Anushka Sharma has congratulated the newly-wed couple, actors Vicky Kaushal and Katrina Kaif along with a confirmation that they will be her new neighbors. Anushka also mentioned that she now hopes to stop hearing construction noises.

She took to her Instagram Stories to share Katrina’s post of her wedding day. “Congratulations to both you beautiful people! Wishing you guys a lifetime of togetherness, love and understanding.” She also wrote, “Also glad you are finally married so that now you can move into your house soon and we can stop hearing construction sounds,” wrote Anushka alongside the photo of the couple. 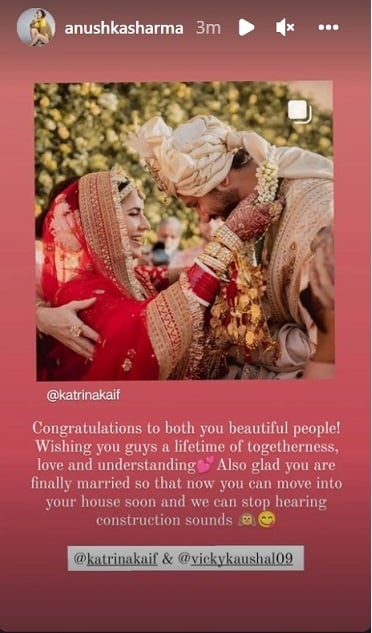 Previously, many reports had surfaced online that Katrina and Vicky have rented an apartment in the same sea-facing building where Anushka Sharma and her husband cricketer Virat Kohli live.

Vicky Kaushal and Katrina Kaif had tied the knot yesterday at the Six Senses Fort Bawara in Rajasthan’s Sawai Madhopur. A few hours after the wedding, Vicky and Katrina officially announced the beginning of their forever. They shared a bunch of candid pictures from the ceremony on their respective Instagram accounts. The couple captioned the post as, “Only love and gratitude in our hearts for everything that brought us to this moment. Seeking all your love and blessings as we begin this new journey together.” 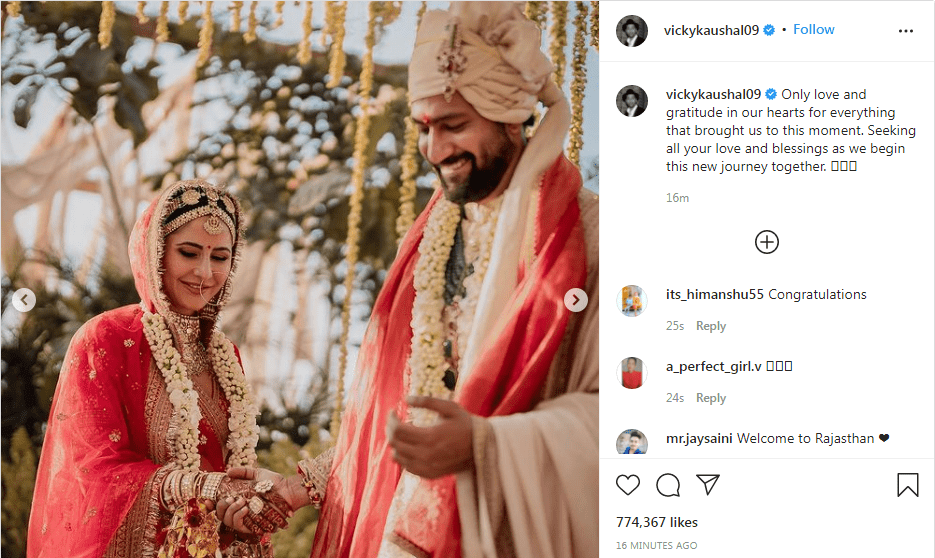 Many celebrities took to comments to congratulate the newlyweds. Actress Priyanka Chopra wrote, “So happy for you! Mere yaar ki shaadi hai (It’s my friend’s wedding)! Congratulations both of you! Ure perfect together.” Her husband Nick Jonas commented, “Congrats!” Hritik Roshan commented, “so amazing. Sending you both all my love !! Have to dance together soon!” Kareena Kapoor Khan said, “You diddddd ittttt. God bless youuuuuu both.” Deepika Padukone penned, “Wishing you both a lifetime of love, laughter, loyalty, respect, and companionship! @katrinakaif @vickykaushal09.” Alia Bhatt wrote, “Oh my god you guys look so so so so beautiful.”

Katrina Kaif and Vicky Kaushal completed the pheras ritual on Thursday afternoon in the presence of their families and friends. As per news agency ANI, the pre-wedding festivities had begun on December 7 with Mehendi, followed by sangeet on December 8. Kabir Khan, Mini Mathur, Neha Dhupia, Angad Bedi, Gurdas Maan, Sharvari Wagh, and Vijay Krishna Acharya were among the celebrity guests at the wedding.