Started her career as a child artist in Bollywood at the tender age of six in 1939 and become one of the most loved and versatile actresses ‘Meena Kumari’ called a Tragedy Queen of Bollywood. Born on August 1, 1933, Mahajabeen and then consider Meena Kumari is not just an actress but an era that rules the entire Bollywood from 1950-the 1960s. Her performances are etched in the minds of cinema lovers and continue to evoke endless emotions. 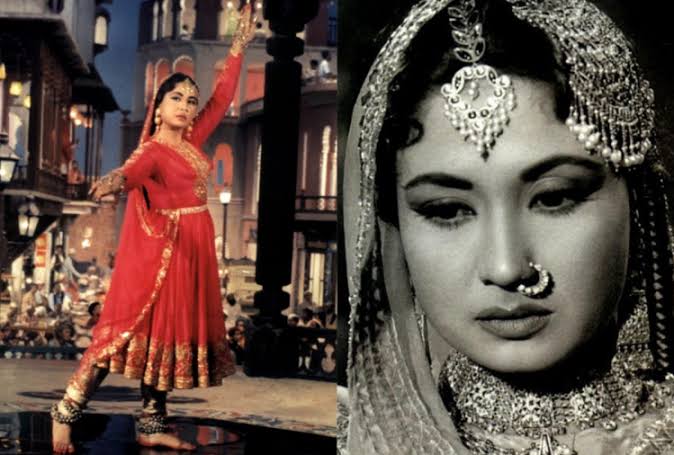 Her life is no less than a mysterious tragic incident which leads her to ‘The Tragedy Queen of Bollywood.” Perhaps, this was the reason why she nonchalantly exhibited roles that had complex shades that were powerful and delved deep into the emotions. However, she started her career as a child artist in the movie Bacchon Ke Khel but was recognised as Meena Kumari from the movie Baiju Bawra in 1952. She received immense love from the fans and become the star that leads her to wake up with leading producers, actors and directors of that time.

She made her appearance in many big movies including Sharda, Daaera, Azaad, Kohinoor, Miss Mary, Shararat, Phool Aur Pathar, Mere Apne, Dil Ek Mandir and many more. But without a doubt, her most sensational performance, which is revered even today, would be Sahib, Bibi Aur Ghulam in 1962,  where she played the character of Chhoti Bahu and won critical acclaim and many hearts. Apart from several failed relationships, she married her director of Pakeezah ‘Kamal Amrohi’ in 1952. However, the marriage is not last long and they separated in the year 1962 without having a kid.

Her failed relationship and marriage and alcoholism took a toll on her health. She was last seen in her most successful music drama ‘Pakeezah.’ However, she was not well even at the time of shooting Pakeezah but did her professional duty as an actress. This movie took 14 years to complete and unfortunately becomes the last for Meena Kumari. She died in 1972 at the age of 39 just before releasing the Pakeezah. Legendary actress ‘Vaheda Rehman attend her funeral and said, “Maut Mubarak of Meena.”