Kangana Ranaut is one of those Bollywood actresses who always surprise her fans. Be it movie announcements, project updates, or her outspoken opinion queen Kangana always has something new to offer to her fans. This morning too, Kangana did something similar, she shared the first look of her upcoming film ‘Tiku Weds Sheru’ from her Instagram account. Nawazuddin Siddiqui and Avneet Kaur are going to be seen in lead roles in this film. 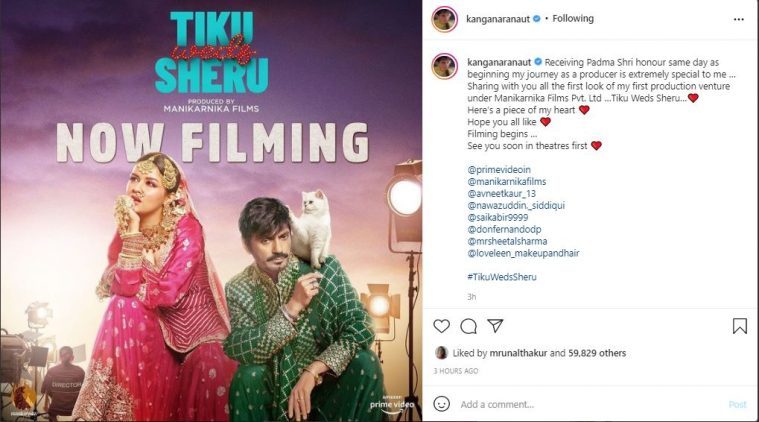 Taking to her Instagram handle, Kangana shared the first look of Nawazuddin and Avneet, who play Sheru and Tiku in the film. Sharing the poster, Kangana wrote, ‘The day I am receiving my Padma Shri award, my journey as a producer begins. First of all, I am sharing with you the first look of my first production venture under Manikarnika Films Pvt. Ltd. This is a piece of my heart. Hopefully, you will like it. Shooting has started. See you soon in theatres.’ Kangana wrote while announcing that the film has gone on floors. According to estimates, Tiku Weds Sheru will release in the year 2022. Nawazuddin Siddiqui and Avneet Kaur will be seen together for the first time on screen. Sai Kabir is directing this film. Kabir has earlier directed Kangana’s film ‘Revolver Rani’. It is believed that this film will be released next year. Meanwhile, Kangana, who was last seen on the big screen in the movie Thalaivii. This film was made on Tamil Nadu Chief Minister Jayalalithaa and Kangana played Jayalalithaa in this film. His biopic film was well received by the audience. Talking about Kangana’s upcoming films, she is working in films Tejas and Dhaakad and she has completed shooting for both these films. She will be seen playing the role of an Indian Air Force officer in the film Tejas. Currently, she is working in Rajneesh Ghai’s Dhaakad.