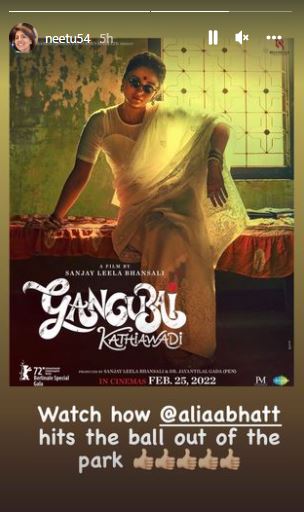 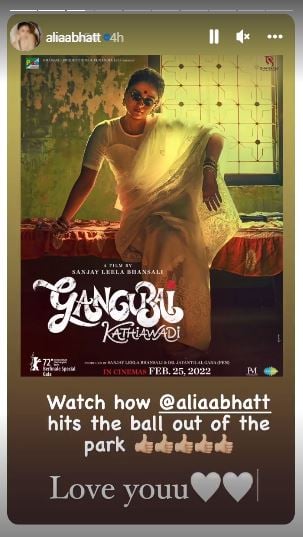 Ranbir Kapoor’s mother and actress Neetu Kapoor has also expressed her reaction after watching Sanjay Leela Bhansali’s ‘Gangubai Kathiawadi’. She shared the poster of Alia Bhatt’s film Gangubai Kathiawadi on her Instagram story and praised her performance. Sharing this poster of Gangubai, he wrote, ‘Look how Alia Bhatt hits the ball out of the park’. Neetu Kapoor wrote ‘Love you’ while Alia Bhatt shared this post on her Instagram.

Before Neetu Kapoor, Ranbir Kapoor’s sister Riddhima Sahni had arrived in Mumbai to attend the screening of ‘Gangubai Kathiawadi’. After watching this film, Riddhima Sahni also could not stop herself from praising Alia Bhatt. She wrote, ‘When two great people come together, magic happens. What a great movie Sanjay Leela Bhansali and Alia Bhatt. Very good performance. Alia Bhatt, you have done amazing’. A few days ago, when Ranbir Kapoor was captured by the media in his camera, he was seen doing the signature step of Gangubai. Apart from these, many stars including Vicky Kaushal, Janhvi Kapoor, Malaika Arora, Anil Kapoor praised Alia’s performance. Talking about Alia’s films, she is currently working in Brahmāstra, RRR, Darlings, and Rocky Aur Rani Ki Prem Kahani. Out of these, except Rocky Aur Rani Ki Prem Kahani, all the films are releasing this year.